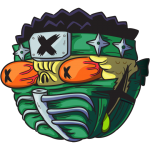 Sushisassin is silent, stealthy, and sworn to pursue a mission so secret that he himself has forgotten the point of it. He'd be the perfect ninja spy... if not for the telltale fishy smell that gives him away every time. 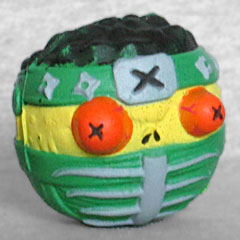 And so we come to the end of Series 2, with another new Just Play character. Sushisassin's name is easy enough to parse out into its inspirations, but actually saying it requires a bit of linguistic gymnastics to bridge that gap between the long E sound at the end of "sushi" and the short A at the front of "assassin"; it's not like anyone pronounces the words "sush-uh" or "ee-ssassin," right? Say it enough times and it starts to make sense, but the first time you encounter it is odd.

Actually, even the "sushi" part of his name is confusing until you get to examine the design: at a glance, he just appears to be a green ninja with yellow skin

and black hair; he has a headband with a metal plate in the front and small shuriken on the sides, and a cloth with what appears to be a little more armor over his mouth. Once you get him in hand, though, you realize the thing over his mouth is actually a fish skeleton - those are the ribs and the spine, trailing down under the chin with the tail tucked up against his back. A large X is cut into the side of his head, suggesting a past battle, and his orange eyes bug way out on either side of a flat, upturned nose. It's a decent little design, and feels at home in the Madballs' history.

Now we just have to wait a few months, until Toy Fair 2018, to see if Series 3 will ever be released.