Today we reviewed the Funko 9POA Stranger Things Demogorgon. And because I don't want to have to write about it again in the future, now seems like a fine time to review the Mystery Minis version, as well.

The Demogorgon is the threat in Stranger Things 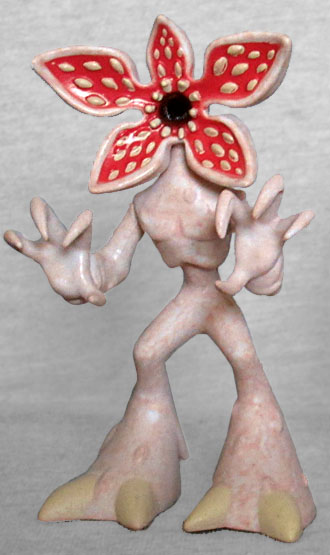 Season 1, though not a villain: it's a wild creature hunting prey, not a malevolent force looking to hurt anyone. It's not like the shark was a "villain" in Jaws, right?

Demogorgon is a skinny pink creature with raised claws, a tiny waist, and some truly epic cankles. Since Mystery Minis are done in a cartoony style, the demon's only got three fingers on each hand - and since the real thing only has three big toes, this Mini has two. Everybody loses one of everything! Except head-petals: this turd blossom has all five of the flaps that form its head or face or mouth or whatever you want to call that. They're open wide, with raised bumps representing its teeth (though the paint tends to stray pretty far from the sculpt, it must be said). There's a black hole in the center of the head, presumably its throat, and that's ringed by a set of teeth as well. There are various bumps on his legs and a spine visible on its back. The skin is a splotchy pink, but they actually bothered to paint the toenails a shade of yellow. Weird! I mean, the fingers prove that it looks just fine to leave them pink. 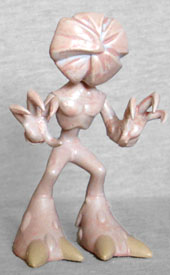 The Demogorgon is packed in a 1/12 ratio, meaning it's available in every case. However, there's also a variant, available only in every other case (in other words, 1/24). As you can probably guess, the variant replaces the head, switching from a wide-open mouth to one that's closed up tightly. Everything else is the same, it's just a new head that's been glued in place.

The @funko_layout account seems to have gone dormant, so there's no way to tell which figure is which. Fortunately, since the series is all about kids, and kids are very small, it's pretty easy to tell just by shaking the boxes which ones have puny human younglings rattling around inside, and which one has a huge face-eating monster.