In 2010, Mattel released a series of Hot Wheels designed to tie in with the Toy Story 3 license. Dubbed "Character Cars," they took Buzz, Woody, and the rest of the familiar pals and turned them into vehicles. Kind of like if Toy Story had been made in the Cars universe. The idea was clearly a hit, because the premise is 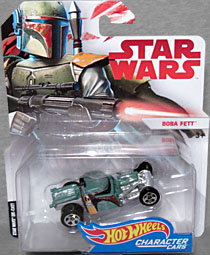 still going strong today, and has branched out to many other properties - for instance, Star Wars.

Constantly in pursuit of its next target, this rat rod hits the road with the ruthless determination and advanced technology of the infamous bounty hunter Boba Fett. The vehicle uses its twin turbo engines and rear jetpack to accelerate to unimaginable speeds, while the antenna protruding from the cab enables it to communicate with the Empire and criminal underworld. The thrill of the hunt keeps this mercenary on track!

The packaging for these... well, not "figures," but we don't want to

keep saying the word "character" over and over, so whatever. It's got a nice painting of whomever the car inside represents against a white background, and the Star Wars logo in red on the upper right corner. The portrait fades out as it moves down, leaving the toy floating in front of a nearly blank white field, making it stand out nicely in the packaging.

The artistry that had to go into turning 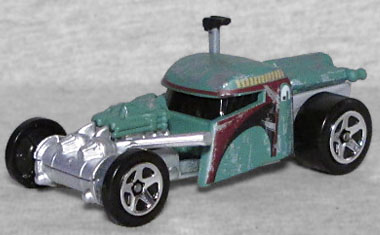 Boba Fett into a car is highly impressive. The passenger cab looks like his helmet, with his black visor serving as the windshield and the weathered paint on the roof calling to mind the scratches and scrapes he had (no dent, though). Fett's rocket pack lays flat on the back of the car, and the top of the engine block resembles the gear on his gauntlets. In case there was any lingering doubt about who this car is meant to be, the underside features an embossed version of Fett's bantha-skull logo.

There have been lots of "branded" Hot Wheels that just printed an image of a specific character on the roof of a car or side of a van, but the Character Cars are far more inventive than that, and take a lot of skillful design. I do my best to not get sucked into collecting Hot Wheels (the last thing I need is something else to take up space and money), but I doubt Boba Fett will be my only get from this line - looking at the included checklist, Greedo and Maz Kanata are a couple of the real standouts.