We told you Black Panther's Minimates would be the same kind of scavenger hunt Thor 3's were. And once again, Walgreens gets their sets out first!

Hasbro may have let us down when it comes to Killmonger 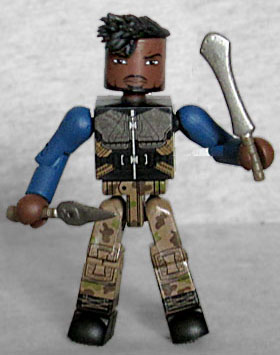 in his Vegeta cosplay, but Art Asylum dives right in! The colors are perhaps a bit dark, but he's wearing his blue jacket and has all the body armor tampoed on. Nice choice to not try making this a molded piece: the armor is relatively thin on the actual costume, and that would have bulked the toy up too much. The brown camouflage on his pants doesn't continue on the back of the legs, which is something we're used to, if not exactly fans of. In the package, he's wearing his lion/goat/whatever-it-is mask (which, if you read the Marvel Knights Black Panther series in the '90s, may remind you of the way Mephisto was drawn there, just in brown instead of red), but if you choose to remove that, the set also comes with a little topknot of dreadlocks to fall over his eye. And he has the same sword and spear tip as the Marvel Legend, so either that's something that will be in the film or both companies were working from the same old info.

Our second figure may be known as "Casino T'Challa," 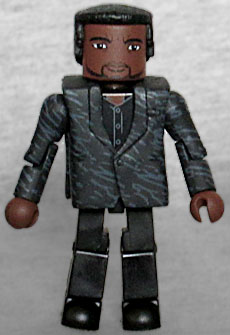 but he's really just a civilian version, out of the Black Panther suit and in his normal kingly clothes. No one has ever made a civilian T'Challa before! The closest we've come has been unmasked versions, and most of those don't even have their own hair, just paint. There isn't much of a likeness to speak of, but he does have his facial hair painted on, so that helps. T'Challa is no more colorful in his everyday wear than he is as the Panther, wearing black pants and shirt and a dark grey jacket with lighter grey stripes painted on. Hey, he's supposed to be a black panther, not a black tiger! It's a bit surprising that Wakanda has casinos - you'd think that would be the sort of vice they'd grown beyond as a society. And if, as their pairing in this exclusive set implies, Killmonger is robbing the place while King T'Challa is there, how did he even know it was there? Doesn't Wakanda try to keep a low profile?

Getting a casual T'Challa is nice, though there's no question it's Killmonger who's selling this set.