James Cook first encountered a kangaroo in 1770 - at the time, there were about 700 different Aboriginal tribes in Australia, speaking 250 different languages. Cook had managed to run into the Great Barrier Reef, and had to set in for repairs on his ship, so he had time to kill with the natives. That's when he and botanist Joseph Banks saw a kangaroo and asked its name. 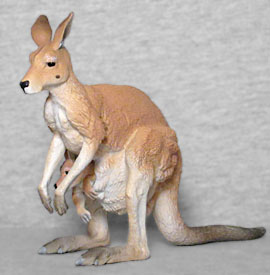 The Guugu Ymithirr people, who lived on the northeast coast, called it gang-oo-ru: the "ng" is soft and faded, like in the word "sing," and there was probably an equal stress on the final two syllables; the Eurpoean pronunciation, meanwhile, makes the "ng" hard, like in "ingot," and only stresses the final syllable. Gan-OO-ROO vs. kang-uh-ROO. Plus, the name only referred to the grey kangaroos native to that area, not the red kangaroos more commonly seen elsewhere.

When settlers worked their way into the interior of the country and used their butchered pronunciation (of what was, from the locals' point of view, a word from another language anyway) to refer to any kangaroo or wallaby, of course no one would know what they were talking about! In American terms, it would be like seeing a Labrador Husky in its natural territory, and learning the Montagnais word for it was atemu, then heading to the Great Plains and trying to call a Plains Indian Dog the same thing. So 1,400 miles away from the word's origin, the Baagandji people heard white guys talking about kangaroos and assumed it was a European animal no one had ever heard of before. Since they knew all the local animals, they thought "kangaroo" meant a settlers' horse.

This entry was posted in addendums, Safari Ltd. Bookmark the permalink.