When Jack interviewed for the job 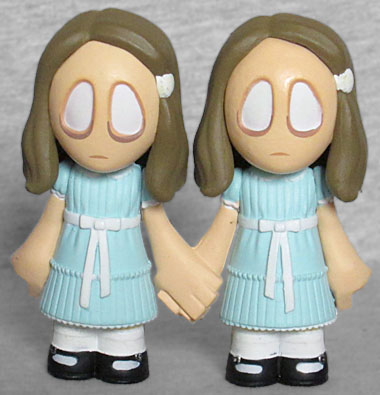 as the Overlook Hotel's winter caretaker, his soon-to-be-boss, Stuart Ullman, told him a story about the previous man to have the job, Charles Grady. In the winter of 1970, Grady brought his family to the hotel, just like Jack would. But at some point, he suffered a complete mental breakdown and ran amok, killing his family with an axe. The most famous evidence of this is the sudden appearance of the two creepy little girls while young Danny is riding his Big Wheel around the halls, entreating him to "come and play with us, Danny. Forever. And ever. And ever."

Although the Grady girls are generally referred to as twins, 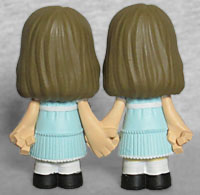 they're not - they may dress alike, but the movie tells us they're 8 and 10. Available in a 1:36 ratio, the Twins are really easy to identify in the case - having two figures in one box makes "the shake test" highly reliable. At least you don't have to find them separately, right? They're molded holding hands, and thus are permanently attached to one another. Their dresses have sculpted folds and wrinkles, big white bows on the belts, and ruffled knee socks. Their hair is pulled to the side and clipped in a little barrette. Considering the Walgreens exclusive series that came out, it's a bit surprising there's no "bloody" variant of them. 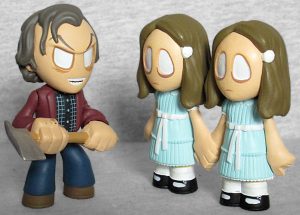