The gimmick of this year's "Power of the Primes" theme is that the Transformers can join up with various "Prime Masters" to gain new powers. When you buy a Deluxe, Voyager, or Leader Class figure, it includes a card revealing the powers granted by one combination. Just one. Out of 12. So here's a list of all the powers Grimlock can gain: 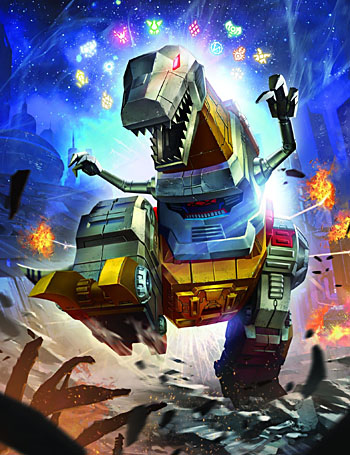 Alchemist Prime
Enhances the power in allies' circuits.
Amalgamous Prime
Takes smaller forms to test his strength.
Alpha Trion
Analyzes brilliant victories to enhance his tactics.
The Fallen
Unleashes harsh justice on those who abuse power.
Liege Maximo
Speaks truths his enemies don't want to hear.
Micronus Prime
Links with faster bots to combat his only weakness.
Nexus Prime
Combines with teammates to make them stronger.
Onyx Prime
Channels his willpower to the spark of other bots.
Prima
Inspires allies with courage and might.
Quintus Prime
Seeds worlds with bots of unimaginable strength.
Solus Prime
Demolishes enemies with the Sparkbreaker battering ram.
Vector Prime
Peers into future to see when Grimlock king.