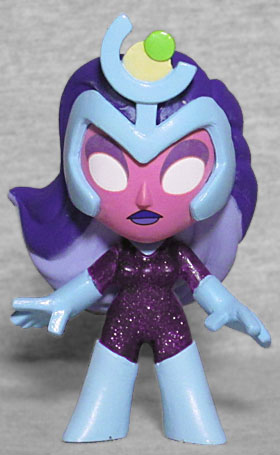 Supernova is the most powerful member of the Vindicators. She doesn't play well with others, possibly because of her tragic origin; she uses her power responsibly (though it's also a burden to her) and never gives up. She's a hero!

This figure is standing with her arms spread slightly, which is a little bit of a problem - in the episode, Supernova was never shown doing anything other than hovering. 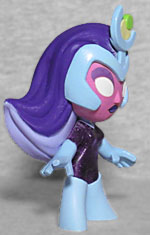 In order to convey that, she'd would need some kind of translucent flight stand, which Funko has done for other Mystery Minis, but must not have worked here for some reason. She really could have used it, though, because her hair makes her very back-heavy, and prone to falling over. Her body is a sparkly purple, an effort to duplicate her Singularity-style "you can see the cosmos within my body" appearance, and her hair is two colors - instead of having shadows, the animation made her hair lighter underneath to suggest an internal glow. Her headdress has a green circle overlapping a yellow circle, which is the toy's best effort at duplicating the tiny sun and planet that were floating there - there's no way they'd have been able to get all the other little planets that orbit her.

Supernova is a GameStop exclusive, but while the packaging claims she's available in a 1:24 ratio, the entire assortment is 1:12. You should be able to find her in one of the middle boxes - either left or right side, top or bottom layer.