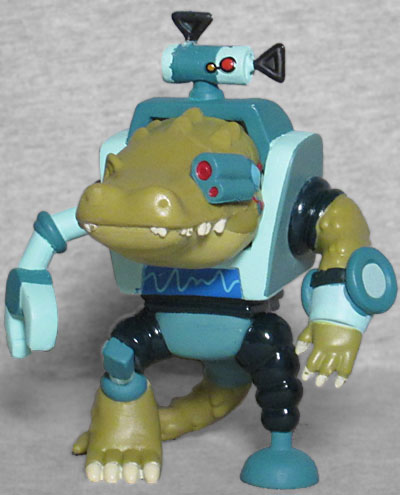 Crocubot is the logical, robotic member of the Vindicators. He doesn't play well with others, possibly because of his tragic origin; he uses his power responsibly (though it's also a burden to him) and never gives up. He's a hero!

Crocubot combines the powers of a cold, unfeeling reptile with the powers of an equally cold, and unfeeling machine. Why does he do this? Who built him? What purpose could it serve? All these questions and fewer will not be answered in "Vindicators 3: The Return of Worldender"!

Of all the Vindicators in Rick and Morty Mystery Minis Series 2, 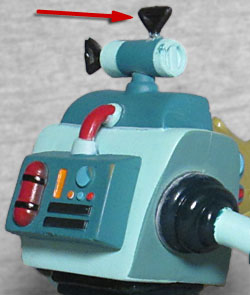 Crocbot is the one I was most looking forward to - he's just so cute! He's got a croc head and tail sticking out of his blocky mechanical torso, a flesh left arm and a simple pinchy claw on the right side, then a real right foot and a rounded cup for the left. His left eye is actually a pair of cameras with wires that run along the side of his head and into the robo-frame. A canister on top seems to serve as another head (in the episode, it turns and looks wherever Crocubot is looking), but it's also a weak point for this toy: the small triangular antenna on top tends to break off due to the weight of the figure rattling around inside the box. So if you get him, make sure you check the bag carefully before you throw it away.

Crocubot is a Hot Topic exclusive, available in a 1:12 ratio. They all are, no matter what the back of the packages claim. You should be able to find him in one of the middle boxes - either left or right side, top or bottom layer. And he's one of the two heaviest figures in the line, so identifying him is quite easy.