This is... technically a member of the Vindicators? Maybe? Their sidekick/probationary member/janitor? 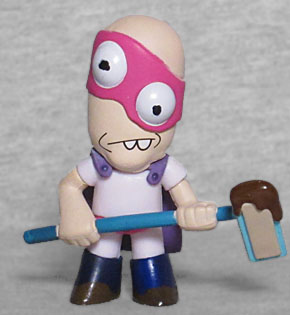 It's Noob-Noob, the type of joke Rick and Morty does best: the "lol xD I'm so random" manufactured irreverence, calculated to do nothing except highlight how off-the-wall and against-the-grain the show can be. Whoa-oh-ho-ho, aren't they wacky! Look at them go! Wubba-lubba-dub-dub!

(And honestly, if you think jokes like Noob-Noob or Mr. Poopybutthole are going to stand the test of time, find somebody who remembers what South Park is and ask them how well Manbearpig has aged.)

Noob-Noob is a sickly little homunculoid that looks like a beachside caricature artist's rendering of Eric Trump. He has an oblong head, uneven eyes, and big buck teeth that poke out of the side of his mouth. He wears a maroon mask and trunks, a white T-shirt and tights, and a purple cape. He's holding the Swiffer he used to clean up 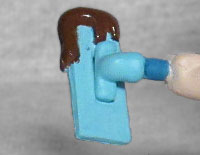 Rick's diarrhea - there's even some sculpted on the end of it, and painted on his boots. His logo is a lowercase N on the front of his trunks.

Noob-Noob is not a store exclusive, being available in every case. The published ratios for this series are all a mess: every box shows the characters available in different numbers, while the reality of the situation is that everyone in every case is packed 1-in-12; that's a particularly welcome change in Noob-Noob's case, since this little turd was originally going to be 1:6. Two of him in every damn case? Why?! The far more popular Pickle Rick was only planned to be 1:24, which seems outlandishly stupid. First Funko screwed up the numbers on the Mad Max boxes, now this, too. What's going on over there? Fortunately this time it worked out in fans' favor.

If you really want a Noob-Noob, he's not hard to find: he's the lightest figure in the set, and almost feels like an empty box when you pick it up.