Wearing borrowed clothes and finishing up a long day of work, hired guns Jules Winnfield and Vincent Vega stop by a diner for a bite to eat, and to reflect on recent events. But their day is not over yet. The diner is held up by a pair 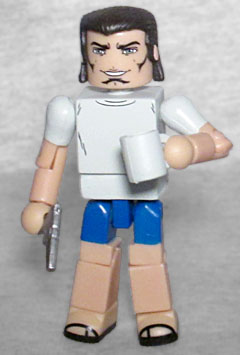 of robbers, Pumpkin and Honey Bunny, culminating in a stand-off that could end very, very badly.

A long day of work? It's, like, 10am. They got to Brett's apartment (in the Valley) at 7:22 and were on the road by 8. They had to be out of Jimmie's house (Toluca Lake) by 9:30. From there they went to Monster Joe's Truck and Tow, in North Hollywood. That's about six miles, but Mr. Wolf drives real fast, so they were probably there in less than five minutes. Even accounting for any paperwork that had to be done at the junkyard and how long it took them to walk to the diner, this has been a very short day so far. And Vincent had a long way to go before the day was over. 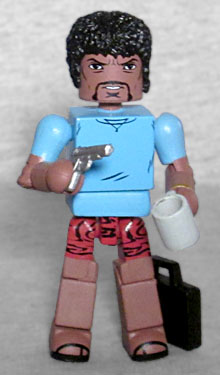 This set features both a Casual Vincent and a Casual Jules, wearing the clothes Jimmie gave them: sandals, swim trunks, and T-shirts. Vincent's shorts are navy blue, while Jules' are red with a black pattern. Sadly, neither of the boys gets the designs on their shirts: neither Vincent's UC Santa Cruz Banana Slugs nor Jules' Krazy and Ignatz. Obviously we don't think Art Asylum should have licensed the full, real designs, but they could have cheated it somehow, right? Big blocks of color in the right places to get the idea across without treading on trademarks. Both of those figures use the existing hair, but have new facial expressions. They each carry their pistols (the same mold here, since the guns they used in the movie - a Star Model B and a Auto-Ordnance M1911A1 - looked nearly identical) and get a coffee cup, and the briefcase is in the tray between them. The set also includes an extra pair of plain hands, to again make up for the mistake in the Jules & Vincent two-pack. 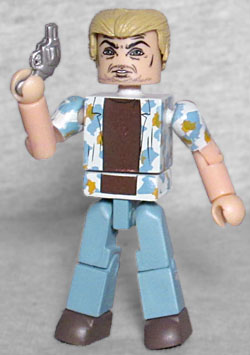 Pumpkin, aka "Ringo," is not the world's first Tim Roth Minimate: remember, Incredible Hulk got Minimates, and that means Emil Blonsky/Abomination already exists. The face on this one is much more detailed, though it still doesn't look very much like the real man; or should we say, the face does look like him, but the head it's on doesn't. Not everybody has a head suited to the Minimate block form, and Tim Roth is apparently one of those people. If you isolate the tampographed details, you can tell exactly what moment in the film it's from, but look at the figure as a whole and you lose it. Anyway, like Jules et Vin, Pumpkin gets one of those waist caps to show that he's got his shirt untucked, but the fact that he's wearing a Hawaiian shirt over a brown T-shirt means that the line gets broken if you turn his waist.

You can't have a Pumpkin without his Honey Bunny, 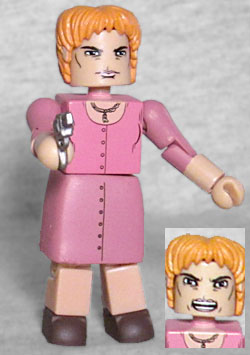 because the two love each other very much. Here's a fun fact for you: the word "coney," as in Coney Island, is an old term for a rabbit (or, more specifically, the word "rabbit" originally meant a young coney, just like "puppy" means a young dog); and although the word today rhymes with bony or stony, the original pronounciation actually did rhyme with honey (and bunny); you can still hear evidence of this in the name "Cunningham," which means "rabbit village." Yolanda's last name is never revealed, but you can pretend it's Cunningham, and that's where her nickname came from. Honey Bunny is wearing a dress that has buttons printed up the front, but it should be more purple than the pink it is here. Her necklace is painted on, and the set includes an alternate head for her, showing her freaking out. She and Pumpkin are both armed with snub-nosed revolvers.

This set was a Hastings Entertainment exclusive. If you've never heard of Hastings, well, don't feel too bad: they basically only existed in the uninhabited parts of America. Imagine a Suncoast or FYE that was large enough to be its own standalone store, rather than part of a mall. Like a Borders or Books-A-Million that was built on movies instead of... books. Anyway, they expanded into collectibles a little bit, which is why they had this exclusive, but they went bankrupt in 2016. Which is for the best, because screw those guys. Anyway, you can now find this set from plenty of resellers online, at reasonable prices.