You're a glorified re-release with a minimum of new parts, you get a quick review on the blog. 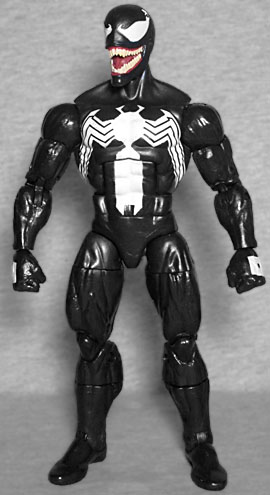 Eddie Brock takes vengeance on the skeptics as the all-consuming, spine-chilling symbiote, Venom.

This figure is mostly the same as the Venom released a couple years ago in Spider-Man Legends Series 3: same body, same paint, different accessories. Instead of two pairs of hands, we just get the fists - no open claws.

The head is similar to one of the ones that came with the last figure, but this time the mouth is open rather than closed (meaning the lower jaw had to be molded as a separate piece and glued into place). The shape of the fangs and the speckles at the back edge of the eyes make it clear this is a Mark Bagley design, completing the trio of the character's most famous artists (since the last one had Todd McFarlane and Erik Larsen-style heads). All the Venoms you could ever need!

We do get some new pieces, though. First, there's a little "collar" 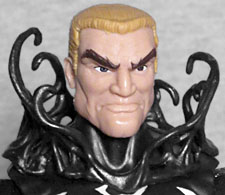 of symbiote tendrils that plugs into a hole on the back and sits on his shoulders. Since this is similar to the way artists would generally show the suit moving on or off its host, we get an unmasked Eddie Brock head, which is something that hasn't been seen outside of Minimates since the 5" figure days. It's got a big frown and bigger eyebrows, exactly the way Todd McFarlane drew Eddie. In fact, if this were any more obviously Todd McFarlane's art, ToyBiz would come back from the grave to insist that it was really J. Scott Campbell's. 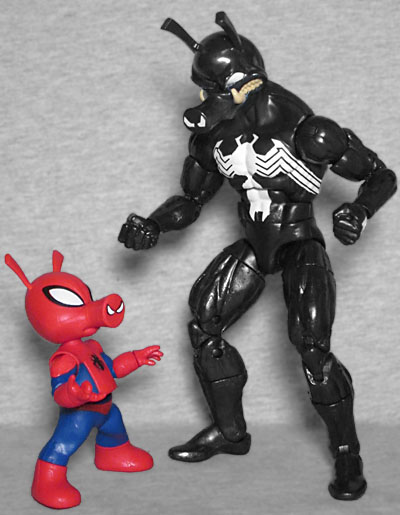 If you read yesterday's review of Peter Porker, the Spectacular Spider-Ham, you'll recall that figure came with an alternate "Venomized" head. The socket was too large to properly fit on Spider-Ham's neck, but that's because it wasn't meant to: rather, it's an accessory intended to be shared with this toy. Off with the human head! On with the pig head!

1992's What The--?! #20 (part of the "Infinity Wart" crossover) introduced a symbiote enemy for Spider-Ham, the confusingly named "Pork Grind." Yes, I get that it's a pun on "pork rinds," but come on: the name "Venham" is right there! While Spider-Ham was a small cartoon piggy, 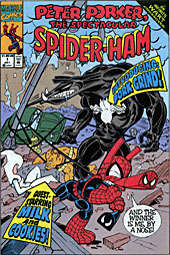 Pork Grind was shown to be human-sized, so putting the head on this body makes perfect sense. He still has the eyes on the end of his snout, though of course they're an angular Venom sort instead of a smoother Spidey style, and the tusks make it clear he's a boar, not a pig.

Since that comic came out the year after Terminator 2, Pork Grind speaks like Arnold Schwarzenegger (by way of Hans and Franz). If you're thinking "how does printed speech manage to convey any accent at all," well, he specifically says he's come all the way from Austria.

This Venom seemed like a pretty boring figure, since it really isn't any

different from one we already had - you were basically buying him for the Monster Venom BAF piece (the right leg) and an alternate head. But the use of the pig head makes a difference. The Venom and Eddie Brock heads will be handed down to the SML3 toy, and this one is going to be Pork Grind forever.