In conjunction with today's Black Lion review, here's the official profile of its pilot, Shiro: 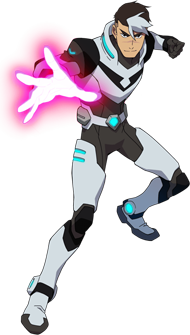 Captured by the Galra while on a mission, Shiro was experimented upon before escaping back to Earth. He returned with a weaponized robotic arm and vital information to lead the team against his former captors. Calm, thoughtful and wise beyond his years, it takes more than a fleet of Galra cruisers to get a rise out of Shiro.

Shiro is, of course, the equivalent to the character Western audiences knew in the '80s as Sven. "Sven" was the renamed version of Japan's Shirogane Takashi, who died in Episode 6 (Sven was merely "in a coma"). This connection even gets a wink and a nod in the new cartoon.