An early host for the powerful cosmic entity 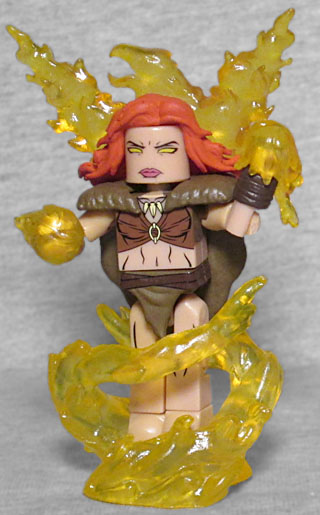 the Phoenix Force, Phoenix is able to create fire that, while incredibly hot, has no effect on the Fallen.

The Avengers of 1,000,000 BC are an interesting concept: forebears of the heroes we know today got together in prehistoric times to fend off a massive threat. And so we learn that Jean Grey was not the Phoenix's first encounter with humanity, but just one in a long line. We also learn that it definitely had a "type," because Phoenix 1MBC is still a hot red head. [Stop kinkshaming the Phoenix Force! --ed.] This makes it clear that "1,000,000 BC" is more poetic than literal, because not only were there no redheads a million years ago (the gene responsible for red hair has only been around for 100,000 years at most), there weren't even humans a million years ago! The evolutionary chart had only made it to Homo erectus so far. Not-Jean is wearing a fur cape and loincloth, and the Phoenix effect behind her head is actually glued onto the hair. Her shirt and necklace are painted on, and her accessories include fist-flames and a swirling fire base, in translucent yellow. 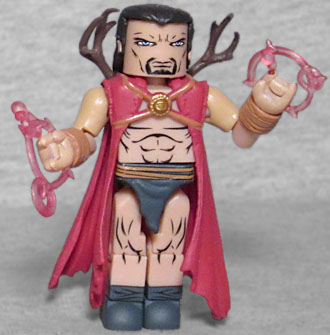 It had previously been said that Agamotto was born 25,000 years ago, but he and the other two Vishanti (his mother Oshtur, and Hoggoth) are extra-dimensional entities, so what does our concept of time mean to them? Agamotto has lived as a mortal before, so maybe he's tried that out more than once. When he appears in visions, it's usually as a tiger, so it's a shame there's no hint of that in this design. He wears a red cloak, tying him visually to Dr. Strange (with antlers attached to the shoulders acting like Stephen Strange's ostentatious collar), though the goatee and the slicked-back hair have hints of Baron Mordo. His blue loincloth is the same mold as Phoenix's, and he's got alternate "magic spell" hands.