In today's review, yo talked about how Fifield's design changed when the movie was almost done. Let's take us a look, shall we?

Here's the scene as it appeared in the film:

And here's the original version:

So as you see, it's the same events, just with a better design. Or a worse design. Depending on which way you look at it.

Incidentally, it seems Fifield's posture there is based on a deleted scene from the original Alien, in which Ripley rounds a corner and finds the xenomorph squatting the center of a hallway like a weird, organic cube. While the scene didn't make the final cut, it was in there late enough that Heavy Metal's Alien: the Illustrated Story (drawn by Walt Simonson after being shown a two-and-a-half-hour long cut of the film) still includes it: 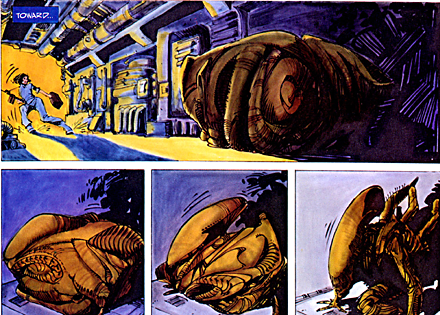 This entry was posted in addendums, comics, videos and tagged Alien, Reel Toys. Bookmark the permalink.