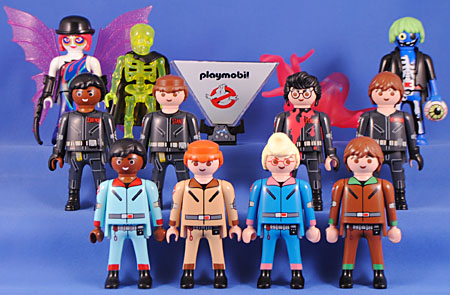 I must confess that I was and am a little bummed by both of these series. The figures are cool but the hologram function isn't that great, especially in lieu of getting proper sets from the second movie. And given that all four sets cost $10.99 each... I don't know, it's just kind of a "shoulder-shrug" for me. Paying a premium for a feature I don't really want. The cartoon sets are a little more fun and they really did a great job with the four Ghostbusters, but the rest of the line kind of has a cheap vibe to it since it's just a bunch of repainted vehicles and "ghosts." They all run $21.99, which is actually a fair price for two figures and a vehicle, I just wish they were directly from the show. Basically across the board the only things actually from the source material at the figures (and their direct accessories). 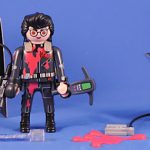 Egon, like the other guys, is much the same as the figures from the first film but now wearing the dark gray jumpsuit from the sequel montage. Egon is a bit different though as he is inexplicably splattered with the pink goo from the movie (and it is a different pattern than the slime on GB1 Venkman). I guess it's visually neat but it's not really "a thing" so it just seems kind of odd; but at least it's something. Like the others he comes with clip-on gloves, a proton pack, a removable proton stream and a ghost trap - plus Egon gets his PKE meter and a little splotch cling of the pink slime. He, and all the figures, also come with a little cardboard piece that folds in to a pseudo shadowbox to enclose the ghost trap and app making the hologram effect a bit more visible. 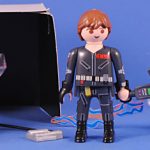 Pete's basically the same as Egon minus the painted and cling-accessory pink slime, easily making him the most boring figure in the series. It's really kind of nuts that they couldn't find any sort of extra accessory for him to come with (other than the PKE meter, which he does have). Heck, I'm even reminded that these guys also don't come with the iconic Santa hats, which would have been a nice bonus (and required an extra hair piece). Those probably would have gotten me to double up. I also wish they had tooled up a new "widow's peak" style hair piece for Venkman, because I find it hard to tell if this figure is meant to be him or Ray until I read the name badge. 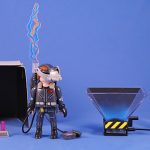 Ray once again comes with his ecto goggles, which connect via rubber hose to a little read-out device. It's more a result of reusing tooling than being accurate to the film but it's a neat touch and a cool idea for the gear. He also comes with a little silver tray and three pink vials - implicitly some of the pink ecto goop for them to test; neat! Other than that, he's the same as the rest. 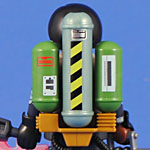 Winston is easily the coolest figure in the series because he comes with the sequel's signature slime blower gear! The figure is essentially the same as the others, but instead of the proton pack and gear he comes with a fantastic recreation of the Slime Blower. It's three green tanks that attach to a brown frame which connects to a clip-on vest. A rubber hose plugs into the frame and then connects to the "gun" at two points - and a painted "splatter/spray" effect plugs into the nozzle. It's really, really nice. I do wish the "gun" could be held better and/or in two hands, though. On the plus side, the slime tanks come with labels printed on them as opposed to the graphics on the ghost traps and stuff which are all stickers we have to apply ourselves. It is kinda weird that the blower comes with the gray uniform rather than the accurate tan one. Winston was the only one that never showed up at Toys R Us, so while I was able to get the others there (as the chain shut down) I had to order this guy from playmobil's website. 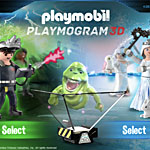 Each of the Ghostbusters figures come with a little fold out including instructions and a QR code link to your smart device's App Store to download the free app to make the hologram gimmick work. The App is primarily branded around Ghostbusters but also includes the animations for the "Snow Princess" theme which features similar figure sets utilizing the same technology (allowing you to freeze and unfreeze woodland creatures). After selecting the Ghostbusters option, you can choose which of four different ghosts to trap (only Slimer appears to be from the movies, though), it then prompts you to (A) turn up the screen brightness, (B) darken your room/environment and (C) place your ghost trap on the screen over the trap graphic. There is then synced animations of three sides of the ghost which reflect up into the inverted clear triangle giving an impression that there is a ghost in the trap. Hit the pedal icon in the app and the ghost gets sucked in to the trap; hit the pedal again and the ghost is released. It doesn't look nearly as convincing as they or we would like to think but it's still kind of neat and definitely a fun new exploration of incorporating interactive digital tech with physical toys. I just wish that it was, like, one set in a whole Ghostbusters 2 Series. I really don't need FOUR of these traps, and without four smart phones you can't even use all of them at once. In reality the only reason to buy all four is just for the figures - there's no, like, "build-a-benefit." I'm sure a big part of that is to subsidize the app, but still... I'd still rather have a Vigo, a Janosz, a Statue of Liberty playset, Courtroom 'busters and ghosts, and so on. 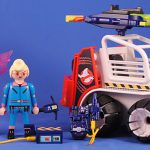 Growing up I was such a big fan of the Ghostbusters cartoon, but weirdly I never had many of the figures. As a result I've become a big fan of the newer toys from the show, like the Minimates and the Mattel Mego knockoffs, so I was ecstatic when Playmobil revealed these! We start with Egon, arguably the the most iconic of the cartoon characters thanks to his inexplicably big, blonde hair! I was expecting Playmobil to just use the "pomp" hair they've put on the movie Egon's but amazingly this is an all new piece which recreate the famous "swirl!" That's actually really cool and surprising (and kind of frustrating that they wouldn't make a new balding hair for Venkman)! The jumpsuit appears to be the same graphics are first movie figures but recolored into the vibrant blue and pink from the cartoon. He comes with a weird "fairy ghost lady," with a bowler hat and Wolverine claws... she looks neat, but also... not. And she certainly isn't recognizable from the show. The set include a repaint of a previous Playmo vehicle which actually looks pretty neat in "Ghostbuster Red and White." The front has a grill that flips down and the back had a gate that slides up and down. There's also a disc launcher that can clip on to the rollcage. In all honesty the vehicular actually does have the vibe of the old Kenner line and I'm digging it more than I expected I would. 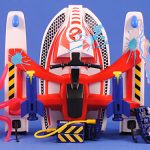 This is easily the weirdest and most disappointing set of the series. Winston is, of course, the best thing about it and the reason to pick this up. He captures the cartoon look perfectly and, like the other figures, includes a proton pack, wand, ghost trap and PKE meter cast in dark blue with yellow rubber tubes like in the show and the Kenner toys! They also come with the proton stream, but it's the same deco as the movie version - it would have been cool if they'd given them different colors, like the show and toys, too. This set comes with a jet ski vehicle, which is novel to complete the "ground/air/sea" attack pattern but it is kind of weird. I will say, though, that it's cooler in person than it looked in photos. It has a couple pontoons and two push-fire missiles. I think a little boat still probably would have been neater than a jet ski, but this is ultimately okay (though unexciting). Sadly, his "ghost" is just a translucent pink Octopus (with blue eyes and, because of the tooling, brain). It's okay but in no way very ghostly, especially compared to the figures in the other sets. It would have been cooler if they'd used some kind of oversized monster or a mer-person ghost. Each of the vehicles have damage in them related to the packed in ghost, which here is, inexplicably, blue splats (but Egon's car has claw marks and Venkman's bike has green splats). 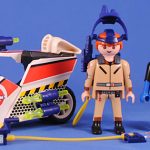 This set is kinda fun. The bike, like Egon's tractor, is a pretty convincing repaint that feels more natural in Real Ghostbuster colors than in the original "Secret Agent" colors. It's a neat little motorcycle with two flaps that flip down to be kind of like armored doors on the bike and flip up to be kind of like wings implying it can fly. Actually, this seems like the kind of toy I would have loved as a kid and played with a lot! As a cyclical collector, when I saw photos of it I just thought "lame, it's only a repaint" but now in hand, like the rest of the vehicles, I'm digging it. Ray came out just as well as the other characters, and once again includes his ecto goggles which are cast in dark blue this time to match the other accessories. The ghost he comes with is the coolest ghost in the series and has a fun "eye" theme going on. He uses the Sharkbeard head to allow a big bulging right eye (though sadly it doesn't telescope) and while the left socket is "empty" he comes with a big giant eye he can hold to make up for it! Add to that the vibrant neon colors and skeletal graphics and this is just a fun ghost-y figure! 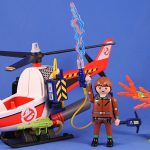 This is arguably the best set in the series since we get another great Ghostbuster figure, a really groovy ghost and a mini helicopter - the latter of which sort of brings to mind the Ecto-2 making this feel almost show accurate! The copter is another repaint but it too looks good in the red and white color scheme, and I dig the black grating graphics on all of the vehicles too - they help make things a bit more visually interesting and give the vehicles all a more industrial vibe. A really cool touch is that the ghost trap can attach to the side of the copter for easy transport (same with Winston's jet ski) and on the other side of the copter is a weird black thing - which I suddenly realize is a rack to clip the proton pack on to! That's awesome! That way Pete can easily transport his gear while also piloting; nice! The figure of him is just as good as the rest of the line, and this hair piece is a better match the cartoon art than to Bill Murray. The ghost for this set is also the raddest - a translucent green skeleton with a cape and little electricity bolts to wield! While I'm bummed that we're once again not getting a recognizable ghost from the show, this one really does fit the tone of it well and is pretty groovy in his own right.

This entry was posted in Playmobil, Rustin's Spoils of the Week and tagged Ghostbusters. Bookmark the permalink.