Two-- no, THREE surprising pieces of Toys "R" Us news

First, The Washington Post reported that two of the three owners of TRU have set aside money to give the ex-workers severance pay:

Bain Capital and Kohlberg Kravis Roberts - two of the three firms that bought Toys R Us in a 2005 leveraged buyout and loaded it with billions of dollars in debt before liquidating the chain in June - are setting aside millions of dollars in a fund to be distributed to retail workers, according to a person involved in the negotiations who spoke on the condition of anonymity. A third owner, Vornado Realty Trust, is not contributing to the fund, that person said.

(Note: You can learn more about leveraged buyouts and the three hedge funds that screwed Toys Я Us here.)

Now, why do you think Bain and KKR would suddenly want to do damage control on this situation, right before the holiday season hits and shoppers everywhere start going gift shopping and getting a reminder of what happened when they see all those empty Toys Я Us buildings? 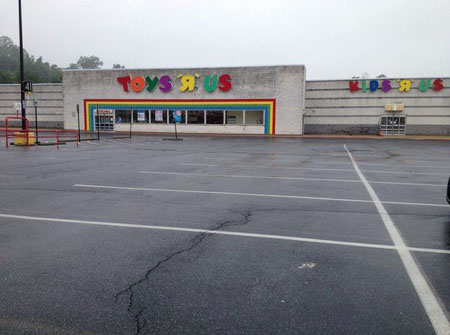 If you're cynical, you might say that it's because, according to The Wall Street Journal, Bain, Vornado and KKR have pulled out of the bankruptcy auction, having realized (only about 90 days after closing the better part of a thousand stores and firing all the employees) that the TRU brand is too valuable to let go.

And not wasting any time, look who's walking around the Toy Industry Association's Fall Toy Preview happening this week in Dallas:

Nine days before TRU's final closure, Geoffrey LLC (the holding company Bain, KKR and Vornado used to oversee the brand) filed for a trademark on the name "Geoffrey's Toy Box."

The same "Geoffrey's Toy Box" that's exhibiting in a booth at the show.

Why is the focus in that listing on the various in-house properties? Because right now, the plan is to open branded sections within "a prominent Midwest retailer" - so basically, like when TRU had its FAO Schwartz section. You'd go into the store, and there'd be an area with Geoffrey-themed decorations and TRU-owned toylines. In short, it's a chance to make people think of TRU during the holidays without thinking of big, hastily abandoned buildings. 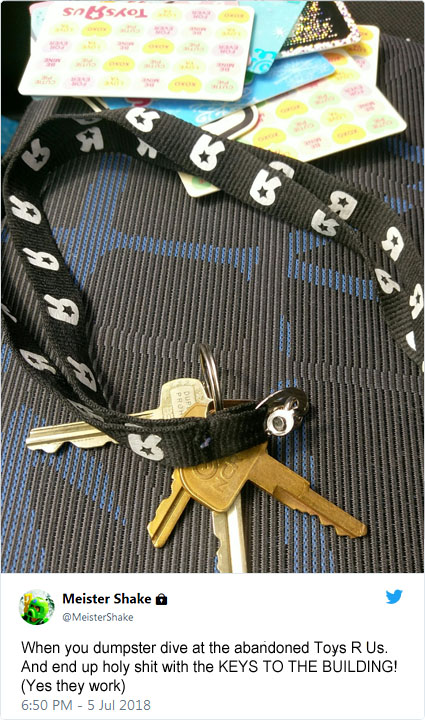 Why, it's almost as if taking a globally recognized and beloved brand that generations have trusted and counted on for decades, and stripping it for parts, isn't the best way to make money! Who ever would have guessed!

This entry was posted in commentary, news, TRU. Bookmark the permalink.

5 Responses to Two-- no, THREE surprising pieces of Toys "R" Us news