So far, this year's "Walking Dead Wednesdays" have featured two humans and two zombies. We have one final review to see which side will win the month! 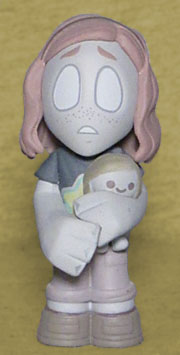 The daughter of Carol, Sophia was a shy, quiet girl. Since her dad was an abusive a-hole, it probably wouldn't have been too long before he turned his wrath on her as well as her mom. She was also very smart, which is probably why she wasn't at all upset when he was killed by the zombies. She played with the other kids in the Atlanta camp, Carl Grimes and Eliza Morales, and was was definitely sad when Eliza's family decided to go to Alabama instead of the CDC. In the second season premiere, the group gets stuck on the freeway and swarmed by a herd of zombies, and Sophia ends up getting separated from the group, setting up the overall arc of Season 2.

Yeah, since this is part of the "In Memorium" series, you can probably guess it didn't go too well. 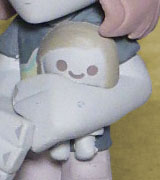 Sophia absolutely has the look of a scared kid: she's standing with her arms crossed, trying to look small, her mouth is open slightly, and her eyebrows are high. Poor little thing! The colors are muted, because that was the style of this series, but you can tell she's wearing her blue shirt and khaki pants. She's hugging her doll to her chest, though even in the grayish colors, it's hair should be darker: the doll was a parting gift from Eliza, and it had reddish-brown hair, not the sort of yellow seen here. 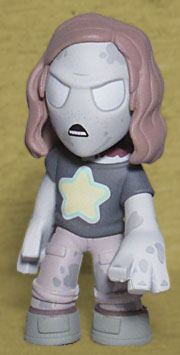 Season 2 began The Walking Dead's most long-running and beloved tradition: fans complaining that the show has gotten too slow and boring. The entire season was spent on Hershel's farm while the Survivors scoured the woods looking for Sophia. That wasn't really the show's fault, though, because the network vastly reduced the bugdet for the season before they'd even aired the pilot episode. Way to have faith in your product, AMC. Anyway, that meant the show had to spend as much time on the same sets as they possibly could, and thus, an entire season on a farm. For comparison, the comic spent five issues there. That extra time did lead to one hell of a (mid-)season finale, though!

Since Hershel believed the zombies were still humans who could one day be cured, he and his family were collecting them in the barn. The Survivors knew that was idiotic, but were polite enough to defer to Hershel's wishes while they were living on his land. Eventually Shane lets the walkers out of the barn so the group can kill them all.

And at the end, out stumbles tiny, zombified Sophia. Gut-wrenching! Especially once you realize she ended up on the farm even before the Survivors did. While the normal Sophia was in every case (in the front right corner on the bottom), Walker Sophia was a much rarer 1:72 (same position, but on the top). Unlike the two Shanes, the Sophias don't share any parts: she's posed as she was seen in the episode, walking forward and swinging her arms, and she has a sculpted eyebrow ridge. She's painted with dirty splotches, and we can see the symbol on her shirt - unfortunately, it's just a big star, not the heart-and-rainbow she was actually wearing. Bonus points for painting the shoulder wound that killed her, though!