Comicbook worlds often reflect our own modern culture, without any thought of how that world's culture would look on its own - especially pop culture. If you, like Gwenpool, somehow made your way from our world into the 616 universe, what would you realistically find there? Certainly not a perfect copy of our world that just happens to have some superpowered people in it, right? Just think about movies: no one is going to go watch an Avengers movie when the Avengers are real people you might see on the street. Imagine what the landscape of pop culture might be like today without Marvel movies. If nothing else, there would be fewer colossal failures like The Mummy, trying to launch their own "cinematic universes," right? 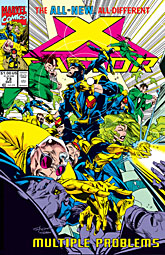 Some comics do give this paradox at least a passing thought. Watchmen famously had pirate comics be the big popular genre, since superheroes were blasé. And in a much smaller example, 1991's X-Factor #73 brought us the revelation that Weird Al Yankovic had written an entire album of mutant-themed parodies ("available in five different editions, collect 'em all!").

In the real world in 1991, that would have been the nichest of niche products, but in a world where mutant powers are normal fact? Sure, it makes sense that that's a thing that could move some tapes down at the local Sam Goody.

The title of this imaginary album was Wings on her Fingers, and we even got to hear a snippet of one of the songs, to the tune of They Might Be Giants' "Particle Man": 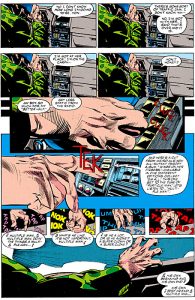 Multiple Man, Multiple Man/
Doin' the things a multiple can.
What's he like? It's not important.
Multiple Man.

Is he a lot? Or is he alone?
A super clown or a super clone?
His own beginning and his own end/
His own best friend, Multiple Man.

Unfortunately, that's where the song cuts off, so we never got to hear what were surely many, many other verses. Nor do we ever find out what other songs were on the album, so go down to the comment box and tell us some of your best ideas for the other tracks.

This entry was posted in addendums, comics and tagged X-Men. Bookmark the permalink.