Today we reviewed Ethan, the weapons expert, one of the human figures in Zombie Lab Wave 2. He's also one of the characters to get a Kickstarter-exclusive variant. 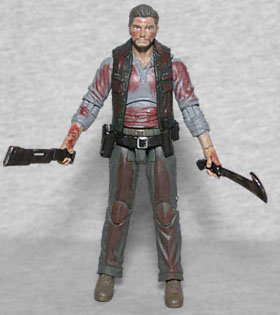 The sculpt of the variant figure is identical to the normal release, with the loose pants, the grey henley, and the dark vest worn over top of that. His head still features the same steely gaze, and the same surprisingly manicured beard. Who's got time for facial manscaping when there's an apocalypse going on?

The normal Ethan is completely clean. At least, his clothes are - there's no washing away the stains on a man's soul. Kickstarter-exclusive Ethan, though, has been in-country a while longer; so his clothes are covered with the blood of his enemies. 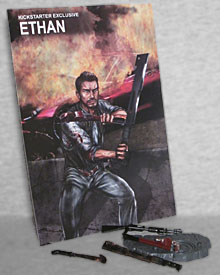 Probably some zombies, too. He's bloodier than Jack was, with the stuff smeared on his face and legs as well as his chest and arms. If they'd been really clever, they'd have designed the red paint apps to end at the border of his vest, since it would be stopping any splatter.

The figure has the same accessories: a police belt, a machete, a sword, a shotgun, and a display base. He's also got a card that shows the same character art as the regular release, but features a different background behind him and the second chapter of the story on the back.