Surely you remember how cool the Hot Wheels Character Cars are. Well, I'd been eyeing the Teen Titans set, and after seeing Teen Titans Go! to the Movies, I took the plunge. 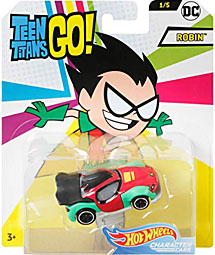 Toy #1 in the series is the Titans' leader, Robin. 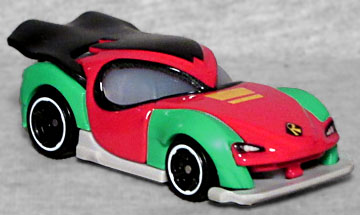 There have already been two Robins in the DC Character Cars lineup: a Tim Drake version that debuted in 2013, and then a Damian Wayne "2.0T" that came out last year. But this does not share its mold with either of them - to match Teen Titans Go!'s cartoony, superdeformed style, the vehicles are similarly exaggerated. So TTG Robin ends up a sporty little coupe.

However, that's not to say none of the design elements are shared. Like Damian, this Robin has a scoop air intake in the front, green fenders over all four wheels, and a windshield that's divided into two "eyes" with paint around it

suggesting a mask. You may say it's a coincidence, that there are only so many ways to turn Robin into a car, but Tim didn't have any of those features. The lower edge and underside of the car are a light gray, like the soles of Robin's boots, his R symbol is placed like a hood emblem, and there's a bunch of black on the roof - both for Robin's hair, and for his cape. The coolest little feature is the license plate, which reads "TITANS GO."