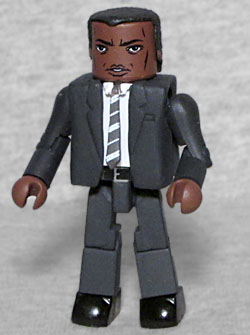 Samuel L. Jackson? Wearing a simple black suit? In the '90s? It'll never work! Like his buddy Coulson, Fury comes with pieces that allow you to decide whether he'll be wearing his suit jacket or not: alternate white arms and a shoulder holster harness. He again has a small pistol, and his necktie gets stripes, because he likes to display some personality within the confines of a restrictive dress code. The likeness is honestly a little better on this Minimate than it was on the Marvel Legend, because the artistic style means that creating a youthful face is just a question of not painting on extra lines, but the hair they chose for him is a better match, too.

Our final figure is Ronan the Accuser, which suggests either that he gets radicalized later, or that Starforce is full of jerkwads to begin with. 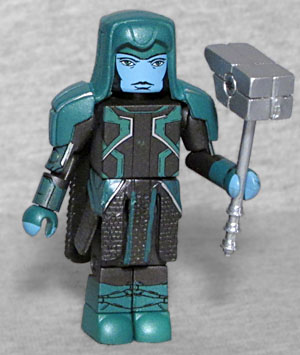 I mean, Korath the Persuer just seemed like he was doing a job in Guardians of the Galaxy, but Ronan was full-on "shoot up a black church to start a race war" mode. Take it as proof that in addition to intelligent life, outer space also has conservative talk radio. Ronan Reigns uses the same hood/cape and skirt molds as the goth version, they're just done in Starforce's team colors of green and silver. ...wait, green and silver outfits, a bunch of unlikable people... is Starforce the Kree equivalent of the Philadelphia Eagles? Does Hala (the Kree homeworld) have to grease its lightpoles every time Starforce wins a battle, to keep idiot fans from climbing up them and knocking them over in celebration? Is that why Ronan carries a big hammer? For celebratory riots? This, at least, isn't the same mold the last Minimate had - you can tell, because the head isn't on upside down this time.
Previous