The DC Multiverse Harley Quinn reviewed today was not Mattel's first chance at making that costume into a toy. There was also one in the Batman Missions line:

If you never saw it, don't feel too badly: Batman Missions was Mattel's attempt to create an "evergreen" Batman line that was low-priced enough for kids to buy, instead of the expensive figures we nerds demand; but like the rest of Mattel's DC product, most stores never bothered to carry the line for long.

The wild thing is, the "el cheapo" figure's face even managed to look more like Amanda Connor's artwork than the "real" one does! 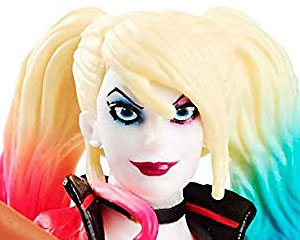 That's pretty nice! If it were available in stores, it might be worth trying a head swap between them.

This entry was posted in addendums, DC, Mattel and tagged Batman. Bookmark the permalink.