Today's review of November Ajax mentioned that Tamashii Nations did one better than Diamond Select by releasing a version of Scrapper, the tiny Jaegerling Ajax tussled with (though weirdly, it came with their version of Titan Redeemer, not Ajax). Anyway, let's take a look at it! 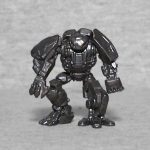 Scrapper was built by Amara Namani, a 15-year-old orphan, which really calls to question exactly how difficult it can really be to construct a Jaeger. It's made from spare parts scavenged from junkyards - for instance, its hands are construction equipment, its toes are old bumper cars, and the armor on its shoulder is at least partially formed from a VW Beetle's trunk.

Although Scrapper is small enough (only about 40') to be piloted by a single person (only about 5'), it's still heavy enough to have a bent, squatting posture. Or maybe 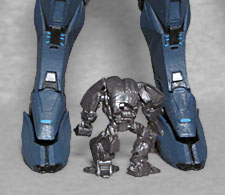 that has something to do with its ability to roll into a ball - a feature this figure doesn't share, given its 100% lack of articulation.

There's also no paint. Bandai's Scrapper is just a lump of soft, pre-posed grey plastic. It stands about 1⅜" tall, which is slightly larger than it should be. Heck, it's slightly too large when compared to Diamond Select Toys' Jaegers, which are themselves done in a larger scale than Bandai's - that means it's gigantic in its own intended line!

Since it's so little, not having articulation is fine - it's just an accessory, after all - and presumably the lack of paint is because Scrapper's colors are so all over the place that painting it accurately would have cost as much as a full-sized figure; and if you can't do it right, why not just not attempt to do it at all, eh? Jerks like us would complain either way.

That said, our biggest complaint is that DST didn't make their own Scrapper, even as an accessory: if you want one, you'll have to get it as a pack-in with one of the Japanese toys.