Series 2 of the Transformers BotBots expands the number of factions to a daunting 11 - with more on the way. One of the new tribes are the Spoiled Rottens, the junk that's been tossed into the trash bins on every level of the mall. Today's bot comes from Level 2.

In days gone by, finding an apple in a mall would have been a really weird thing. 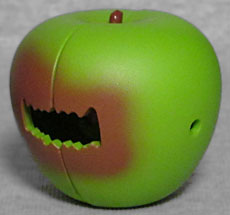 Pretzel? Cinnabon? Hot dog on a stick? Gallon jug of cooking grease spilled onto a small napkin and called Sbarro? Sure, all those things. But fresh fruit? Madness! Now, however, malls are dying and desperate for tennants, so the odds that you'll see a tiny bodega in an abandoned Things Remembered location are increasing all the time.

This green apple has a raggedy hole in its side, with brown paint airbrushed around it. It's probably supposed to suggest the way an apple will "pucker" around a bite, but it doesn't really look right at all. The stem pokes out the top of the apple, and a little pink worm is hanging halfway out a hole in the back.

BotBots are intended to be simple to convert, but this is a whole new level: split the two halves of the apple. You're done.

Sour Wing is not as sweet as she seems. She is full of plans that seem like good ideas, then turn out to be not so good ideas. She's big on daring other bots to do things. 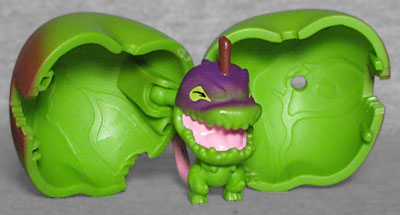 The other bots have learned to think twice, but sometimes they just can't resist.

Sour Wing is a pretty crappy-looking robot. The design of the body says more "T rex" than "dragon," and the purple paint on her head makes it look like she's wearing a mask, rather than looking like natural coloration. The "worm" actually being her tail is a clever touch, but the wings are way too big for the body to support - and why are they coming out of the back of her head instead of the back of her back? 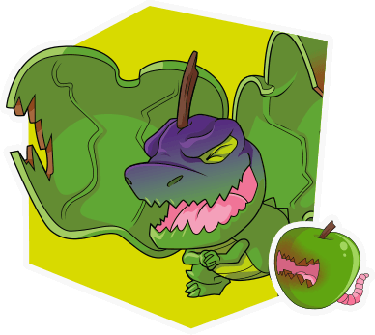 Sour Wing is available in three of the four Spoiled Rottens 8-packs, making this hunk of ass one of the most plentiful BotBots in Series 2. Thanks for absolutely nothing, Hasbro. The Spoiled Rottens may represent trash, but that doesn't mean the toys need to be junk. Sour Wing is quite possibly the worst BotBot toy in the entire line; avoid her if you can.