Maestro, a little reviewing music, if you please!

As mentioned in today's Professor X review, the figure included a head for the Shadow King. While you could just put that head on Chuck's body, there's a better option available: Kingpin. 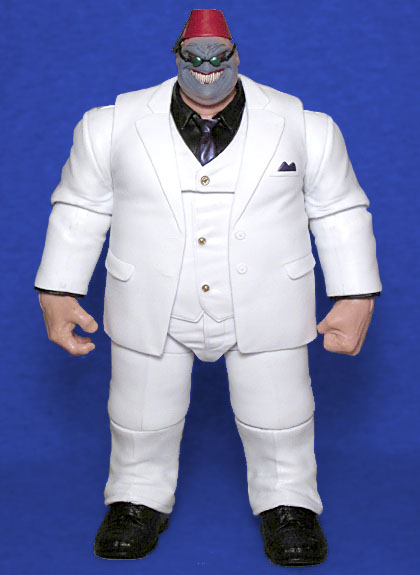 Amahl Farouk was the first evil mutant that Professor X battled. After his apparent demise, Farouk survived as a spirit who inhabited the bodies of others. He renamed himself the Shadow King and fueled his power on the hate and rage of his victims. After years of feeding, he resurfaced and took mental control of the X-Men. Professor X defeated him once more, but the price of this victory was costly: Professor X's legs had again been crippled! 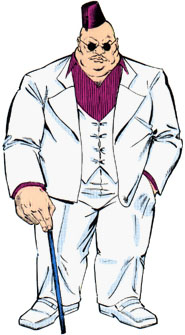 When the Kingpin Build-A-Figure was revealed, a lot of fans wondered why he was dressed all in white, rather than the more classic purple pants. Well, clearly it's because Hasbro had an eye to making the body serve double duty as both Wilson Fisk and Amahl Farouk. Shadow King, in his human form, was always shown as a corpulent man in an all-white suit, and so this figure delivers. Do not worry that Kingpin has suffered unduly in service of Shadow King, however: just as Fisk has had to give up his purple pants, Farouk has had to grudgingly wear a necktie instead of just leaving his shirt open. Compromise!

The facial sculpt is based on Dale Keown's variant cover for Astonishing X-Men #1, with its fang-filled grin and lack of a nose. The tiny green glasses worn in front of his angular red eyes are a separate piece, removable if you should so wish (the tassel on his fez helps hold them in place on the right, while they just hook over the ear on the left).

Unfortunately, since this head needs to mesh with the existing body, the paint is a little weird. In the art, his skin is bluish-grey, which is how his astral form is generally portrayed; but Kingpin's skin is pink, so rather than have a harsh edge between the Spider-Man body and the X-Men head, the grey fades quickly to peach almost as soon as it gets past the eyes. Is there a better way to have done this? Maybe, but not one that we can think of right now.

Giving us Shadow King as an add-on to Xavier is a truly clever move on Hasbro's part - the only other toy he's ever had was an accessory in ToyBiz's 1996 Age of Apocalypse line (as an evil cloud in a jar included with Apocalypse himself), and he's unlikely to get another any time soon. The only drawback is that if you want to have him on display permanently, you're going to have to double-dip on a Build-A-Figure, something that wasn't an issue the last time Hasbro did something like this because no one actually cared about having a Red Onslaught BAF.