Long before Marvel Legends Shuri was even hinted at, there was a version of her in the movie's basic line. She's a little short, by Marvel Legends standards, because Hasbro apparently really doesn't want collectors using the basic figures to supplement our collections: the basic lines stick to a strict 6" scale, not the inflated 6" of ML, so even when interesting characters are only available in that line, they can't integrate with the good ones. The Endgame figure wears nearly the same costume as this, though there's more blue here. That's true to the movie.

What isn't true? The head. For whatever reason,

the hair is wrong. Blatantly wrong. Instead of the complex, coiled braids she wore when going into battle, this one has simple cornrows. How did that happen? Like, if the Funko POP! could get it right, why couldn't Hasbro? I actually went out and got some thread, with the intention of finding a tutorial video about how to create her braids, but the Endgame toy came out before I could get in gear to actually do it. 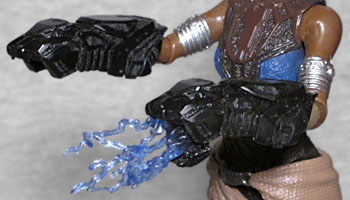 and shoulders, and a swivel neck - nothing great, but sufficient, especially if she was just going to be supplementary. She comes with her Vibranium Gauntlets, and they're actually better than the ML ones: though the energy shooting out of them is done like lightning bolts instead of shockwaves, the translucent blue zaps are on separate plugs that can slide out, meaning she can wear a set that's powered down - something the newer toy can't! (Unless you trade their gauntlets, of course - the arms are close enough in size that you can do that.) 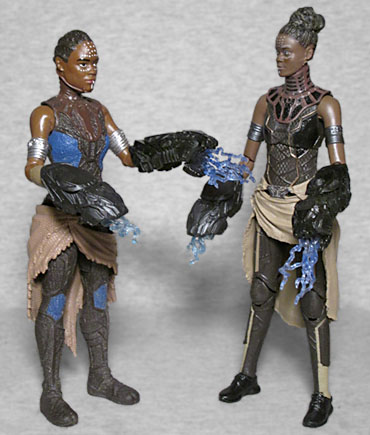