Arriving on Earth from an unknown point of origin, the Iron Giant explores his new environment and befriends a young Hogarth Hughes. But as agressive actions are taken against him by the military, he must battle his violent programming to be who he chooses to be. 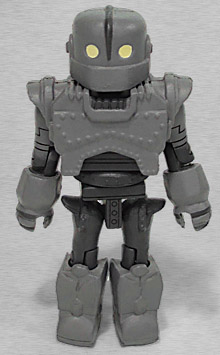 It was 2016 when Diamond Select Toys announced they had the license to cult favorite/acclaimed flop The Iron Giant, but so far they haven't done a lot with it. We had visions of a massive action figure (without having to pay Mondo's "we think people should pay $80 for a movie poster" mentality mark-up), but so far things have been small. Very small! When you're building on the standard 2¼" Minimate body, there's only so much you can do - even with a waist extender and tall boots, this is still barely taller than average. Using arms as the legs was a smart move, keeping true to the movie's design, though the head is missing the dent on the forehead, which is kind of an important thing to have. They did a great job molding all the rivets on his new chest cap, however. 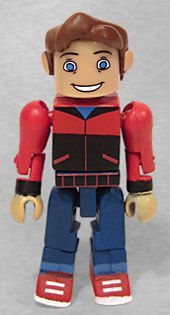 You'll perhaps recall that The Iron Giant was based on a rock opera that was based on a book. In that book, the young boy Hogarth is a minor player at best, while the movie makes him the main character (and gives him for the first time a last name, borrowed from author Ted Hughes). The "Hog Hug" Minimate at least shows an effort to make the Giant look bigger by comparison: he uses the child limbs and the extra-small torso introduced in the NBX line. Still, he comes up as high as the Iron Giant's shoulder, which is, well, giant. Hogarth's jug ears are molded as part of the hair, and his face is painted with that bright friendly optimism he displayed so often in the film. He doesn't have any acccessories - not even his space helmet or pellet gun. All we get in this set is Hogarth, the Giant, and two clear stands for them.
Next