Remember when we suggested Hasbro should make a certain figure and then they did? Well, we're at it again! 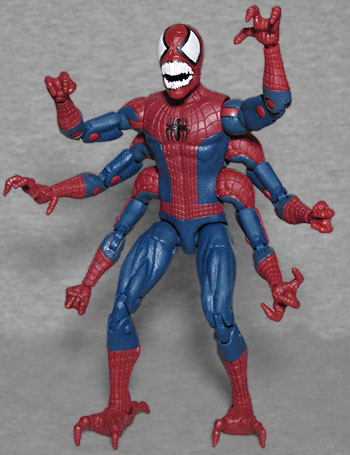 An evil, mindless duplicate of Spider-Man infused with supernatural energy by the Demogoblin, the six-armed Doppelganger has deadly claws and can shoot razor-sharp webbing.

The original Infinity War in the comics involved Adam Warlock's evil self, The Magus, trying to gain control of the Infinity Gauntlet. Needing to distract Earth's heroes while he worked, he sicced a bunch of evil clones on them. Most of those were defeated right away, but two hung around: we've talked about Daredevil's before, but Spider-Man's is the most successful, still being used in stories in 2019.

repainted Spider-Carnage head" - but that makes it better. The hands and feet are new, because he only has three claws on each apendage, not five. The feet are huge and the hands are unexpectedly small. The new head seems to have been digitally sculpted with bilateral symmetry turned on, which is great for making sure the compound eyes come out evenly, but is bad for making the teeth look like a beak instead of teeth. Whoops! The colors on Doppelganger are darker than they were on Six-Armed Spider-Man, to show he's evil.

Doppy comes with the lumpy right arm of Molten Man, this series' Build-A-Figure, but no other accessories. You know what would have been a good accessory, though? An alternate head with his modern look: six round eyes and 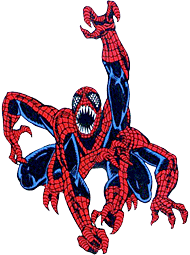 Doppelganger Spider-Man is a character with some surprising staying power - the benefit of having a cool visual right from the get-go. It didn't take any special foresight on our part to guess that the Six-Armed Spidey would get re-upped as the Doppelganger, because he looks neat and the mold already exists. Honestly, though? There are some small, weird flaws that keep him from being the best toy he could be.