The mall where the Transformers BotBots live has a restaurant on Level 2, so you'd expect that's where the Greaser Gang would hang out. And sure, a few of them are right out front, but even more of them can be found down on Level 1 at the tiny little kiosk. That's weird, isn't it? Why is there so much at the satellite location? It's not like Chili's Too has a better menu than a real Chili's. Though they would have drinks. 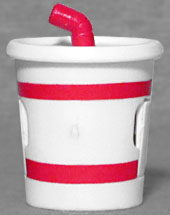 This is the beverage container Sippy Slurps only wishes she was! Waxy paper cup, flat plastic lid, straw out the top. Normal! The cup is white, with red stripes near the top and bottom. (Me, I'd have gone for blue and purple, but maybe they're saving that for a later repaint.) Surprisingly, the straw is articulated, so you can turn it to face different directions - but you can't pull it in and out for a pleasant squeaking sound. The flaps that will become robot parts don't get any paint on them, leaving gaps in the color that you can't avoid.

Twerple Burple is a highly carbonated class clown who brings 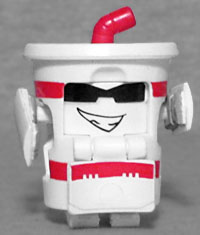 the bubbles and the troubles. She can burp louder and longer than any bot, and her burps send every bot around her into a fit of bubbly laughter. BWWWAAAAARPPPPP!

Oh, like Eudora Welty! The robot's proportions are odd, with the face-covering sticking way out in front of the stomach and feet that barely even clear the bottom of the body. McDonald's Changeables created three different cup-based bots, and all of them were better than this. Or at least more creative. Twerpie has a black visor that's painted to look like cool sunglasses, and has an angular smile - again, this would look a lot cooler with '90s Sweetheart Jazz colors. 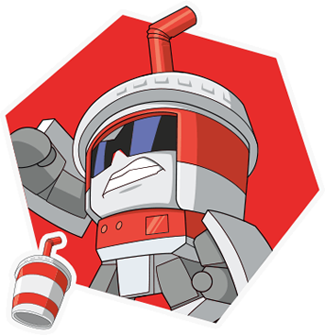 Twerple Burple is only available in the Series 1 blindpacks, where she's #11. Her mold, however, also showed up again in Series 3.