Here's what we know: a bunch of surviving humans are trapped in Tower 101, with the zombies packing the lobby and the streets outside. Here's what we don't know: anything else. This particular zombie looks kind of sporty; Tower 101 is big enough that it might have a gym for the residents, maybe she was in there. Or maybe she was at a gym somewhere off-site and just wandered over with the rest of the horde. Up to you!

For the most part, this zombie dresses like Zombie 003: sports bra and shorts. But we know she wasn't just hanging out at home, because she's wearing sneakers. Her shoes are the same color as her shorts, because she knows how to coordinate her outfits. Of course, the top is red, so she looks very Christmassy.

Is there some rule that all the zombies need to be missing at least one paint app? All the early ones had skin-colored eyes, and now as we near the end, we're getting painted eyes and skin-colored hair. The skin is pale gray with veins and blood, but the short haircut on that brand new head mold is a shade of blonde that's nearly indistinguishable. But oh, at least the eyes are blank white with thin black outlines, right? 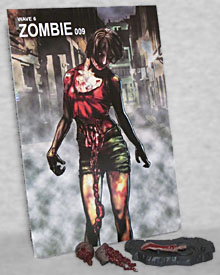 Like we said last time, getting the usual set of accessories - a severed spine, spilled entrails, and an arm to eat - don't make any sense at all when the colors don't match the body of the zombie they come with. That's still true here, but Undead Sporty Spice doesn't have a normal belly section, she instead gets one of the "loose guts" ones, painted in her shade of gray. Now, why couldn't the rest of the zombies get that kind of attention? The art card, which has Chapter 6 of the story printed on the back, shows the zombette standing in a foggy street ("foggy," in this case, meaning "someone opened Photoshop and went to Filter > Render > Clouds and then performed no other steps to make it look foggy"). It also shows her hair having a color, so who's to say what's real or not?