Hasbro brought a Transformers BotBots exclusive with them to San Diego Comic-Con this year: the "Con Crew" set, which features 'bots from three different factions: the Line League, the Fantastic Fuelers, and the Meet n' Greets. 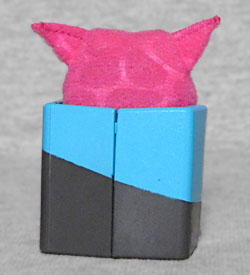 Of the 10 Bots in the Con Crew box set, only one is a new mold - the rest are available throughout the three series released at retail so far. It's hard to tell what this is supposed to be, thanks to the weird little cap on top. It's softgoods, and has two little points that make it look like a pussy hat. Sticking out of a box. That's... not a thing. Beneath the hat, you can feel a wedge shape that makes clear this is supposed to be a highlighter - when it shows up in Series 4, you can expect it to be part of the Backpack Bunch, but for now, the exclusive's add-on limits its recognition.

Converting BotBots is simple, and in this case, all you need to do is open the outer shell and lower the legs. Not hard to do! 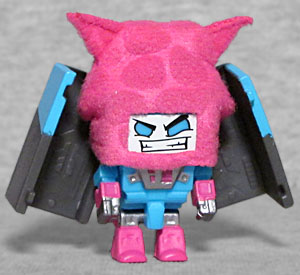 Scribzilla recognizes his signature is in high-demand. You'll leave with his autograph - whether you want it or not.

And there we have an explanation for the hat: Scribzilla is cosplaying a monster. A pink monster with a tail and, judging by the darker spots on the cloth hood, scales. The costume is permanently attached, unless you can pop the "wings'" balljoints out of their sockets. Scribzilla's body is blue and neon pink, and a hole in the mask allows us to see the big ol' grin on his face. The arms may be balljoints, but they sit so close to the body, all they can really do is swivel. 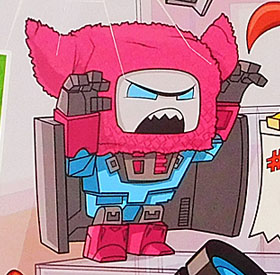 It's great that we got at least one new mold in this exclusive set, and the cosplay angle is a clever idea, but if you can't take off the latter, you can't fully appreciate the former.