We've reviewed all 33 Zombie Lab figures, but we've still got a little more to do.

Once the Kickstarter reached US$100,000, a set of loose heads was unlocked. So taking a cue from Mattel's Heads of Eternia accessory pack, let's take a look at them. Some of them. 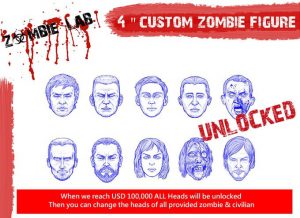 Disappointingly, most of the heads in this set are ones available elsewhere in the line. Remember Kobe? Remember Duncan? Ryan? Robin? Ashley? Even Zombie 002 gets a repeated head here, and that figure was planned from the beginning! That leaves us with only four new molds. It also lets us finally publish a paragraph that was cut from the Zombie 002 review for space:

The idea that all the zombies' skin would turn a uniform shade? Sure, call it part of the symptoms of the disease. Some zombie fiction gives them blue-gray skin, some gives them black veins, etc. You could even make an excuse for the teeth being that color (their mouth is covered in dried blood), but throw a paint app on the eyes! Even blank white would be better.

At first glance, our first new head looks like the Ethan/Jack/Bane mold, with the strong brow ridge and all that, but if you compare them you'll find they're not the same: those guys all had their hair combed back, while the style here is parted in the middle. It's not a huge difference, by any means; maybe painting the hair something other than black would have helped?

One of the heads we get is a zombie, meaning you can choose any of the existing figures to get infected! (The design is ambiguous enough that it wouldn't look out of place on either a man or a woman.) The eyes are red, there's a gash on the forehead, and blood is smeared back the left cheek - which unfortunately hides the way the open mouth is sculpted with some of the skin ripped away.

In the design art, this next head looked like Dr. Krieger from Archer; in the final product, it looks like "Goatee John Wick" - straight, neck-length black hair, a determined look in the eye, and a pointy devil beard. Considering that one of the reused heads here is the "not Glenn" seen on Ryan, it's surprising they didn't just paint John's full beard on.

And speaking of blatantly copying The Walking Dead, the final head is Daryl Dixon. It's more obvious in the art than on the sculpt (thanks to the paint - Hasbro's "Photo Real" stuff has totally spoiled us of late), but there's no question this is a 4" scale Norman Reedus. Get a head start on your Death Stranding/Silent Hills customs!

This set is okay, but it would have been vastly better if more than half of the molds weren't also available on real toys - not much point in creating a "new" character of your own if the pieces are identical to things you may already have. The "Ashley" head at least gets new paint for the face, but the others are just more of the same. At least give them new skintones, if nothing else!

As an extra bonus, Locker Toys Group celebrated the one-year anniversary of their Kickstarter successfully funding by announcing everyone who had pledged would get one more surprise piece: a destroyed torso. It's a single solid mold, and it's flat on the back so it can lay on the ground, but the sculpt is cool. The only limb remaining is a bit of the left upper arm, and the stomach has been torn open to leave the guts strewn about. The paint is predictably messy, but this is just a piece of scenery, so we can deal.

Zombie Lab had its fair share of issues, but for a big line from a company that had never done anything of the sort before, it's been mostly good.