The idea behind the Lost Bots is that they're all items who have gotten separated from their teams. So it makes sense that if you look at the mall where the BotBots live, today's character can be found playing on the elevator - but that's about the last thing that makes any sense. 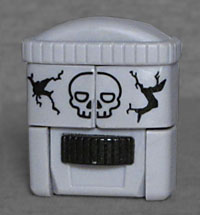 it's not another stick of deodorant - it's not even the same size as a stick of deodorant. This is a tombstone. A tombstone someone was selling at the mall. More than that, a tombstone someone lost at the mall! (And you thought losing track of a burger seemed unlikely.) It's possible this is just supposed to be a decorative tombstone, like you'd buy at Spirit Halloween, but the bio doesn't say anything about it being fake. So we're left to believe that somewhere near the piano store is a memorial store. How is this mall so thriving?! There's no name on the stone, just a skull and some cracks, but what is the dial on the front supposed to be?

Conversion is simple on purpose: unfold the legs, open the panels at the top, and rotate the arms out. Robot!

Grave Rave is on every party's VIP list. She's got enough jokes, 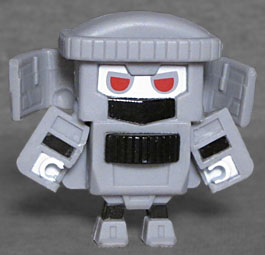 high-fives, and dance moves to keep things energized and make sure the party never dies. Even if someone is dead tired, she's right there to lift their spirits and get them back on the dance floor.

See? Still nothing about her being a joke tombstone. Without the white deodorant paint app, the top of Grave Rave's head looks like she's wearing a knit beanie. We still get red eyes, though they're a different shape, and the paint masks are different from what Nobeeoh had, even accounting for the fact that she's gray and black rather than blue and pink. She may be weird, but turning a deodorant stick into a headstone shows a lot of creativity on the part of the BotBots design team. 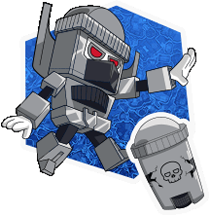 Grave Rave is only available in one pack: a Playroom Posse set with Bunches, Crib Watch, Quackules and Kikmee.