If your local mall hasn't gone out of business, then now is the time of year when those pop-up calendar stores start to appear - maybe that's where all the Seasons Greeters are coming from! The group is mostly Christmas-themed, but a couple Halloweenies have slipped in as well: you can find Sugar Breath being fired out of a cannon toward a juice kiosk on the first floor. 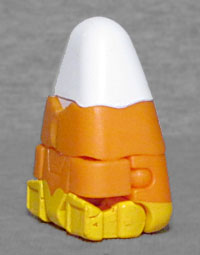 Politics are nothing, I will fight you over the greatness of candy corn! It's been around for nearly 150 years and the recipe (sugar, fondant, marshmallow) has barely changed a bit - in food terms, that's like alligators having no need to evolve since the Pleistocene. It was originally called "chicken feed," and was designed to appeal to the rural agricultural population of America at the time. Every year, I buy dozens of bags of the stuff, enough to last me until next Halloween so I can enjoy candy corn all year long; yes, there's the chocolate "Indian corn" for Thanksgiving, Reindeer corn at Christmas, pink on Valentine's day, pastels on Easter, etc., but nothing compares to the white, orange, and yellow original. Candy corn is the undisputed king of Halloween treats, so there was no way I was going to miss this BotBot.

The conversion is easy, as always: open the panels over the face, roll down the feet, spread the arms, and unfold the tail. Wait, "the tail"?

Sugar Breath only comes out once a year, on Halloween night. 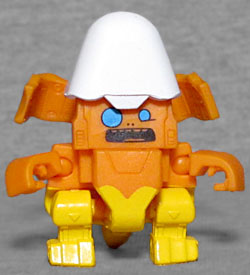 All he wants is to spread Halloween cheer throughout the land, but all the bots run from his scary dragon form. And Sugar Breath runs, too, from the jack-o'-lantern knight who won't stop trying to slay him.

This is supposed to be a dragon? That... doesn't really track. Yes, the feet do look a bit "animal-y," but nothing else does. Sure, the panels that hinge open are in the place where wings would be, but lots of Transformers have those without them being anything other than kibble. It really feels like they designed a robot, realized it couldn't stand up, added a tail to serve as a tripod, and then came up with an excuse for why it would have a tail. I like the candy corn altmode, but this robot form is only so-so. 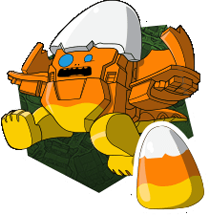 Sugar Breath is a fairly common figure: he's in three of the four Seasons Greeters five-packs, and one of the Fresh Squeezes 8-packs, too.