Sometimes a little censorship is a good thing.

The original Frankenstein came out in 1931, and Universal wanted a sequel right away. It took until 1935 for there to be a script worth making, though, 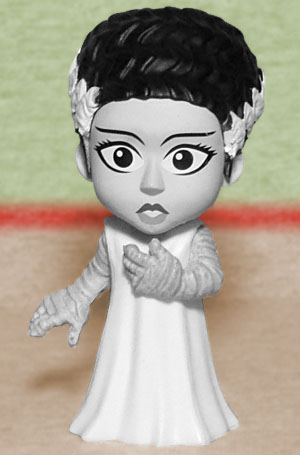 and in the intervening years the Hays Code had been adopted, limiting how much death and violence they could show - contemporary notes from the time of filming suggest there were originally nearly two dozen murders, cut down to just 10 in the final film (along with about 15 minutes of the overall run time, which is now probably lost forever). Yet despite being made under tight restrictions, Bride is a better film than its predecessor, considered the best of the Universal Horror canon, and possibly the best horror movie of all time. Would it still have been so taut and effective without having to be pared down? Or would it have felt bloated and logy?

The nameless Bride only appears in the film for about five minutes, and unlike all the other Universal Monsters, she never made any other appearances: that single scene was all there ever was of her. But Elsa Lanchester's oddball performance was enough to immediately earn the character a spot in the pantheon (it probably doesn't hurt that she's the only female among them). 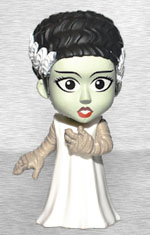 look more "bridal," what with the white dress and all. Since she's entirely covered from the neck down, it's kind of hilarious that part of the censor board's demands were trimming some shots of her that were deemed "too revealing." Really? Too revealing? In this solid burlap mumu? How does that work? It's not like she's wearing a total tits-out burlesque outfit or anything. The final film does a quick dissolve between the Bride waking up all in bandages and standing around wearing the gown, so maybe there were originally some unbinding/dressing scenes in between. She's depicted here wide-eyed and with her hand held to her chest, as though she's been startled by something. Why that, and not her iconic swan-hiss? The stitches on her jawline are sculpted, and her Nefertiti hair sticks out behind her.

Walgreens' exclusive black and white Bride of Frankenstein is available in a 1:12 ratio, meaning she's in every case. Somewhere. There doesn't appear to be a set layout.