There are two things generally true about 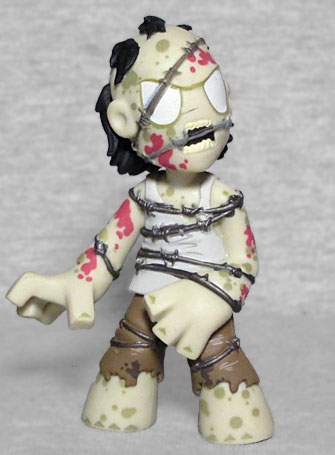 the Walking Dead Mystery Minis: one, each series is based on a season of the TV show one number higher (so Series 4, for example, has designs mostly based on Season 5); and two, the zombie figurines are based on ones seen in the show. So theoretically, this Barbed Wire Walker is meant to be one we actually saw during Season 5, but darned if we can figure out which one. Because a third thing that's true is you cannot do any kind of search involving "walking dead" and "barbed wire" without every dang result being about Negan.

(And side note: how annoying is it that Funko seems to have given up on this line before ever getting to do a Negan? Glenn and Abraham are both in the In Memorium series, but Negan and Lucille are nowhere to be found. It's a shame.) 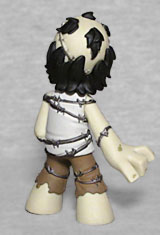