The Walking Dead should change its name to "Gays Gone Bye." 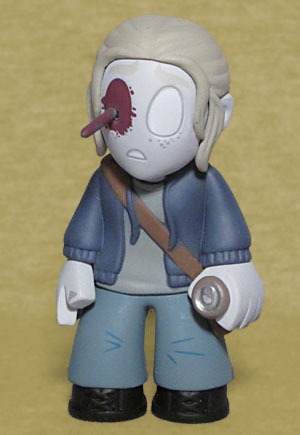 Denise became Alexandria's doctor after Pete (Jessie's husband and the safezone's previous surgeon) got killed for being a shambling sack of toxic masculinity. She got the job despite having dropped out of med school due to anxiety-induced panic attacks (though switching to psychiatry would mean she would have had to do three years' residency at a hospital, so she had more experience than she let on), but she still managed to lose her very first patient. That's gotta be just great for the ol' self-confidence. She did get it together enough to eventually start a relationship with Tara, but unfortunately, that was at the end of the 2015/16 television season, which was a bad time to be queer. And now she's in the In Memoriam series. Spoilers, I guess!

The In Memoriam figures aren't quite black and white, but the colors are deeply desaturated, leaving Dense looking almost grayscale. She's wearing normal human clothes - jeans, a T-shirt, a hoodie - and has a brown satchel slung across her chest. Her left hand is molded holding the can of orange soda she'd scavenged as a gift for Tara. And since the humans in this series are depicted at or near the moment of their death, she's got a crossbow bolt sticking in the back of her head and out through her eye. Yes, she doesn't even get her own unique death, she inherits someone else's.

Denise is a 1:24 figure, available (in every second case of figures) in the middle left spot on the top layer.