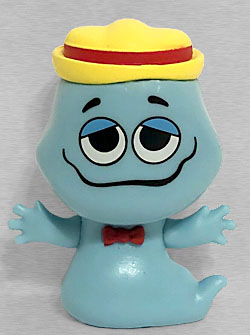 Hot on the success of Count Chocula and Franken Berry, General Mills introduced the first blueberry-flavored cereal, Boo Berry, in 1973. Frankenstein and Dracula were chosen as the inspiration for the first two mascots because the Universal Monsters were very popular at the time - seriously, Universal Monsters in the '70s were like superheroes today. To make their monsters kid-friendly, General Mills portrayed them in commercials as total scaredy-cats: they were rivals to each other about who had the better cereal, but then they were scared out of their wits whenever they met a child. Great way to tone them down and make them safe for even the littlest kids! So naturally, they were utterly terrified when they met their new neighbor, Boo Berry.

In his first commercial, Boo was chained to his cereal box and bowl like

Jacob Marley (though as far as we know, Jacob's chains weren't clamped to his nipples, like Boo's). The modern incarnation of the ghost goes all-in on his chosen colorscheme, with a blue hat and a purple bowtie; this Mini is based on the retro design, where his hat was yellow and his tie was red.

Boo Berry is the shortest of the Mystery Mini cereal monsters, largely because he doesn't have any legs - just an ectoplasmic tail drifting away from his body. His arms are open, like he wants a hug, and his heavy-lidded eyes go well with the character's Peter Lorre-inspired voice.