Transformers BotBots Series 3 introduced five additional factions. And a whole new wing of the mall, of course, including a three-story arcade, where the Arcade Renegades hang out. Papa Click can be found peeking over the railing on Level 2. 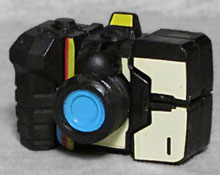 While the Arcade Renegades do have some new molds, half their ranks are filled out by repaints. Some make sense - a soda, a wristband - but others are more esoteric. Why would an arcade have a camera around? Is it a prize? Can you win it with tickets? That might explain why, despite the body looking like a modern DSLR camera, the colorscheme here makes it look like an old Polaroid Instamatic: because it's been sitting in that prize case since the '70s, waiting for someone to save up enough tickets.

Converting BotBots is easy. For Papa Click, all you have to do is lift the lens, pull down the grip on one side, and split the other side to create legs. Done!

Say cheese! Papa Click has made it his life's work to take pictures of all the arcade's high scorers for the wall of fame. As an instant camera bot, he likes to capture the moment instantly. He means well, but bots can be 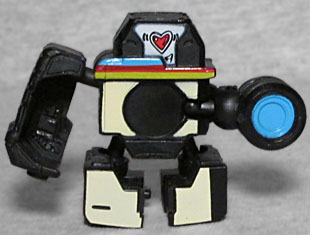 reluctant to pose when they're still right in the middle of a game.

Oh, that explains it! Papa Click isn't a prize to be given away, he's arcade property. He's old because they never upgraded! The camera's creamy white front panel makes this BotBot look different from its prepaint, and the red, yellow, and blue stripes remain visible here. The major difference, though, is that the face has been moved from the center of the torso to the top, so even though this is the same mold from Series 1, the robot looks different. Also, the "eye" is a heart shape, which would have sent a different message if it had remained in the middle of the chest. 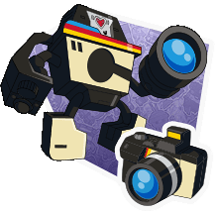 Papa Click is available blindpacked in four out of six iterations of the Arcade Renegades Suprise Pack.