So what are we thinking here, folks? The Frequent Flyers are all travel-themed (international travel, no less), but it's not like malls have airports, so where do they come from: a travel agency? A luggage store? A kiosk that's giving away a Caribbean vacation and just happens to have a whole bunch of props on display? You tell us! 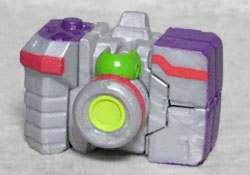 It took until Series 5, but Hasbro finally did the thing you might have expected from the outset, and turned their BotBots camera into a Reflector reference. There's no escaping Generation 1! This doesn't look like the toy, but rather the cartoon model: silver body with purple on the top, green right above the lens, and a red stripe running horizontally around the body. There's another around the lens, and the glass at the end is a bright lime green.

Converting BotBots is easy. For Shudder, all you have to do is lift the lens, pull down the grip on one side, and split the other side to create legs. Done!

Shudder is a bit of a nervous flyer. He had a really bad experience once with a toy airplane and some low-hanging holiday decorations... 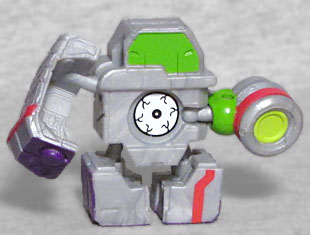 and being a camera bot with a photographic memory, he's a bit traumatized. The other Frequent Flyers can't wait for their next trip to another part of the mall, but the thought just makes Shudder shutter with fear.

That's cute, that the Frequent Flyers consider going to different parts of the mall a big vacation. Too bad Hasbro stopped including maps of the mall so we could know what those different parts were! Shudder's deco matches his terrified personality, his single eye being wide with fear. The purple knuckles on the big right hand contrast with the green left nub. 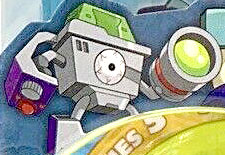 Shudder is available in a Los Deliciosos 5-pack, and two Frequent Flyers 8-packs.