Despite this set of Mystery Minis purportedly being 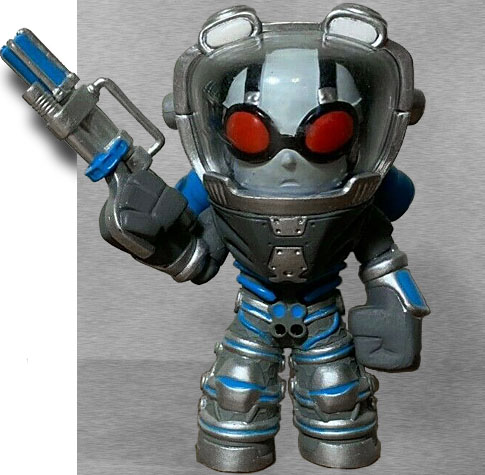 from Batman: Arkham Knight, several of the Minis take their designs from other games in the series. We've already seen this with Poison Ivy, and now here's Mr. Freeze, as well.

Freeze wasn't in Arkham Knight proper - he showed up in the "Season of Infamy" DLC, so he had nothing to do with the story. That may be why this figurine is based on Arkham City, where Victor Fries is one of the most fun bosses in the entire series: you can't attack him directly, so you have to use your sneaky skills to do it; but once you use one technique, 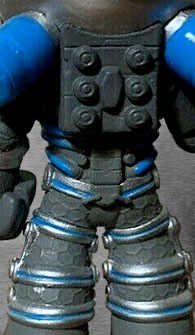 he blocks it and forces you to improvise and switch to another. Be like Batman!

Mr. Freeze is depicted wearing his armor (of course) and carrying his freeze gun at the ready. The clear dome in front of the face lets you see his deep red goggles, and there are two lights on the top. A lot of work went into translating the game renders into plastic - more than you'd expect from a stylized toy like this. All the detailing on the backpack is accurate, and they even covered the undersuit with the hexagon pattern you could see in the close-ups! Unbelievable!

Although being easy to find due to his larger-than-average size and 1:12 ratio, Mr. Freeze was still tough to get ahold of because he was a GameStop exclusive, along with a variant Joker and a detective mode Batman.