This is the latest in a series (of indefinite length and regularity) of blog posts memorializing cancelled toys. Our figure today is Mattel's variant Ray.

The Ray covered in today's review was first shown off at Toy Fair 2017, so it's been a long time coming. But when he was displayed, there was also a planned chase variant standing right next to him: 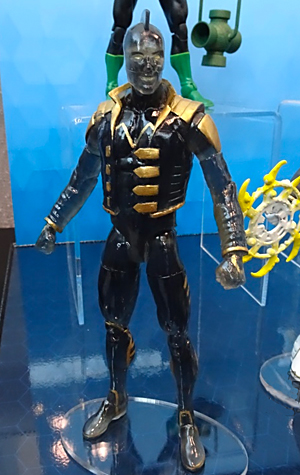 Cast from translucent black plastic, this version depicted the way Ray looks when his powers are active. It really was a great idea for a figure, and might even have worked as the main release. It was shown in several display cases at several shows over the years, but got quietly dropped somewhere along the way, and now that Mattel no longer has the license, we're secure in saying it's officially cancelled.

This entry was posted in addendums, cancelled toys, DC, Mattel and tagged DCUC. Bookmark the permalink.