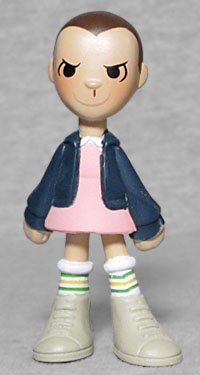 Look, it's Barb! Well, before someone fed her Eggos after midnight.

Just kidding, I know more about Stranger Things now than I did when writing that jokey intro two years ago. Still no interest in seeing the show, but I do at least know that this is Eleven, the little mutant girl who (I assume) drives the plot. She's half E.T., half Akira, and half Stephen King's Carrie. (Yes, that's three halves, but Stranger Things is so far up King's butt, we're going to say it counts.) Also, she's played by Millie Bobby Brown - not to be confused with the cocaine addict who beat Whitney Houston, this is the young girl who Drake keeps creeping on. Leave the teenage girls alone, Drake.

There are two versions of Eleven available in the first series of Stranger Things Mystery Minis, and (like the Demogorgon) they're identical below the neck: sneakers, socks, pink dress, blue windbreaker... you know her basic uniform. The pose is very staid, 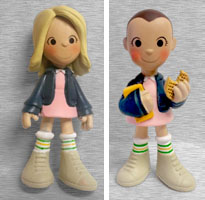 very straightforward, with Eleven just standing there with her hands clenched into fists and held slightly behind her. Is this the pose she adopts when she's using her powers? I certainly don't know, but you might. The difference between the two versions of the Mini is her head: the 1/6 one has her wearing a blonde wig, while this 1/36 one more accurately shows her short-cropped hair. The one in the wig is smiling, while the bald one is furious and bleeding from the nose. Additionally, there was a Hot Topic exclusive that showed her merrily chowing down on some non-brand-name freezer waffles. The fact that the art style for these Mystery Minis looks like Schoolhouse Rock really works for the property, better than the Walking Dead/Horror Classics style would.