Yeah, I'm still salty that McFarlane's Fortnite beat out Transformers BotBots for 2019's Best Line. Everybody's like, "ooh, Fortnte has a banana!" You want fruit? BotBots have fruit! They're called the Fresh Squeezes and they hang out by a kiosk on the ground floor in their wing of the mall. 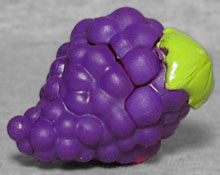 The BotBots mall sells a lot of weird things, but loose grapes have to be one of the weirdest. I've been to a mall that was nearly empty except for a bodega selling fruit off wooden crates, and I don't think even they were selling grapes. There are 79 individual grapes visible in the sculpt, plus one large green leaf. There's some bright red piece of kibble visible if you look at the bunch from the wrong angle, which is its only real flaw.

BotBots are supposed to be easy to convert, so there aren't a ton of steps here: swing down the leaf-arm, pull the other arm out to the side and raise the "cap," then swing the remaining grapes around to the back. Theoretically, you're done at that point.

Bunches loves to dote on his friends with anything they want. Whether it's a warm glass of Energon, a pillow to rest on after a hard day of mischief, 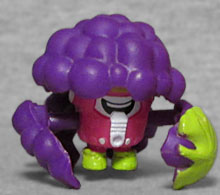 or a luxurious bath to wash the troubles they've gotten into away. Anything, because when they're happy, he's happy.

The robot mode is pretty much crap. The kibble "wings" don't move far enough out of the way to allow him to stand (something that could have been fixed if his legs could extend down a little) and although the "cap" on top of his head can turn freely in a circle, there's no position in which it rises up far enough to not obscure his eyes. The colors are fun, with the hot pink and pale green contrasting with the dark purple of the berries, but the physical design of the toy could have really used another round of refinements before going into production. Even the name is uncreative! 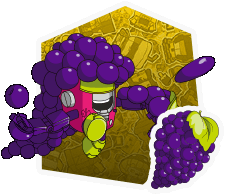