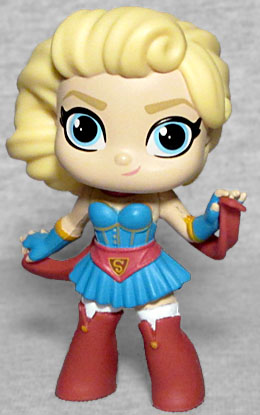 very early - so early, in fact, that it seems she's less an alternate reality version of Kara Zor-El, and more a distaff counterpart to Kal-El. For example, she was rocketed away from Krypton as a baby, not as a teenager, and she was found and raised by a human couple. Of course, the couple was Russian, and they already had one daughter of their own, but they still adopted young Kara Starikov and welcomed her to their family. Even as an adult, she's the one dating Lois Lane, so yeah, this is girl Superman.

According to Ant Lucia in the Art of DC Bombshells book, Supergirl was one of the harder designs to crack - the pose, the hairstyle, the costume... everything went through iteration after iteration, and it took close collaboration with the team at DC to find the right balance. If not for that teamwork, we might have ended up with her hair tied up, and her wearing a garter belt a swimsuit, or even some kind of space suit. 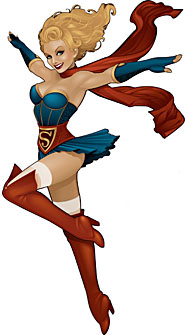 The final product does give her a victory roll, but only one in the front - the rest of her blonde hair flows freely. Her outfit is a blue bodice with gold trim and a shirt skirt sticking out from beneath her large red belt. She wears white stockings beneath her red boots, and has fingerless blue gloves. Instead of a cape, a long red scarf is looped around her neck; on the DCD statue, she was flying, but that wouldn't work for a Mystery Mini, so here she's simply standing tall, and holding the ends of her scarf out to the sides.

Just like Zatanna, Supergirl was supposed to get an action figure, but it was cancelled - not a terrible fate, since it was apparently not using the final design.