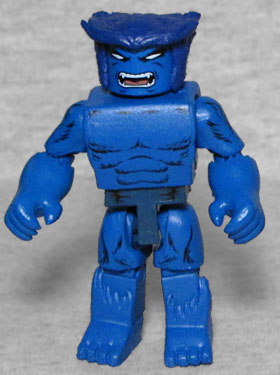 Henry "Hank" McCoy initially only had large hands and feet, and was a natural gymnast, until an experiment turned him furry and blue.

Well, first it turned him gray, then it turned him black, then the coloring style of the era turned him blue. While the other "80s" X-Factor figures in Series 78 are pretty much just re-dos from the box set, Beast isn't. There's been a furry blue Beast before, but this one has less-wild hair and forearms that are a normal length. He does get add-on pieces to bulk him up, but they're proportional. His mouth is open and growling, and his eyes are white. Both figures share the same new hair, with sculpted ears pointing out the sides. 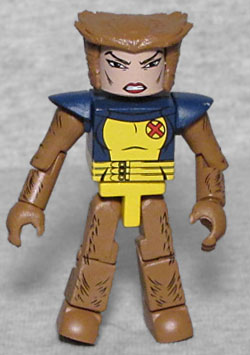 Rahne Sinclair was originally a member of the New Mutants before joining X-Factor. Her power is to shift into a wolflike form.

Yes, and that's why she's in this set: to pair the two teams' animal-people. This is only the second Wolfsbane Minimate, and it's the first one wearing clothes. Her arms and legs remain bare, so her fur is visible, but the torso is covered by her version of the X-Factor uniform. The face is pink, rather than brown; during this period in the comics, her genetic structure had been changed so that if she ever reverted to fully human, she'd become a mindless slave; consequently, she was always trying to edge as close

to the "human" line as she could while still remaining in her werewolf form. The left hand on my figure broke off at the wrist, leaving the peg in the arm; it's annoying, but out of the thousand or so Minimates I have, this only the third one I can remember having breakage issues? That's a solid record!

Series 78 is one of the ones that has a Build-A-Figure, so the set includes some pieces for that. The figure is Strong Guy, and the piece is his chest. Well, chest block and big chest cap.