Did you ever hear the Tragedy of Darth Plagueis the Wise? Because it's got nothing on the tragedy of Movie Arcee the Combiner. 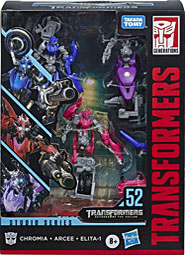 Chromia, Arcee, and Elita-1 are in hot pursuit of Decepticons.

All three of these characters have had figures before - multiples, in fact, in at least three different scales - but they've always been sold separately; there was a Target-exclusive multipack that would have featured all three of the bike sisters plus a repainted Sideways to depict the scene where they chase him and he gets cut in half, but that set was cancelled. Now we've got the Studio Series line, bringing them out in a single three-pack. Probably because properly scaled versions would be too small on their own. Let's look at them in the order they're named on the instruction manual. 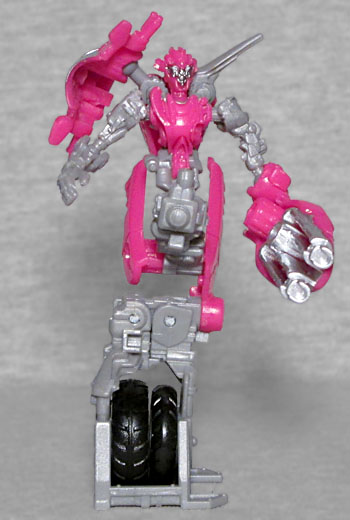 Arcee has been getting toys since the first movie. She'd been in the script, so she got a concept design, and when the movie was huge, Hasbro scrambled to find anything they could turn into plastic for a demanding public. By the time of the sequel, she'd undergone a "combiner retrofit," which split her mind into three bodies... at least, according to the script. The toys treated them as separate beings. Whatever the case, "Arcee" got a much different body, trading her two legs for a single lower appendage with wheels for feet. Her new body is thin and twisty and spiky, and has a large gun for the right hand. She won't stand on her own, so the set includes a grey stand to keep her upright (though black would have blended in with the tires better).

Revenge of the Fallen Arcee had one of 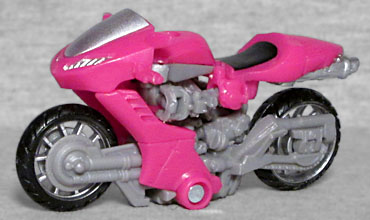 the most notoriously awful conversion schemes in Transformers history. The Studio Series version is slightly better, but is always going to be hampered by having to match the movie. A lot of the steps in the instructions are unclear, but they'll get you close enough to finished that you'll be able to figure it out from there. Arcee's altmode is a Ducati 848. In the movie, the robot was pink and the bike was red; all the previous toys have opted for red, but this one goes pink. 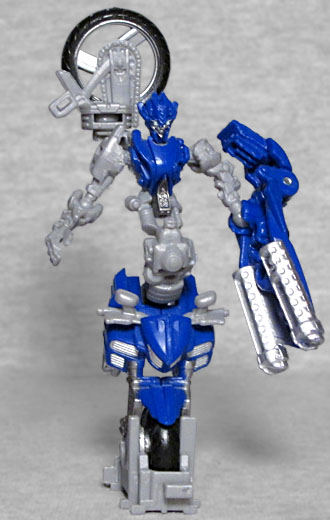 Chromia was the blue femmebot (usually), and has a robot mode that's distinct from her sister: he spine is straighter, her kibble ends up in different places, and she only stands on one wheel, not two (though the toy still gets a display base to make sure she even can stand). Her arm remains a giant gun, however, with the blasters made out of the bike's exhaust pipes. Alternately, you can plug in the included sword, if she's feeling stabby. Like Arcee, Chromia moves at the neck, shoulders, elbows, and a few joints in the waist. The arms pop off easily, especially when you're transforming her (all the bikes, honestly), but reattaching them is not hard.

Chromia's conversion is just as odd and fiddly as her sister's above, and the instructions are just as unclear. It's not Hasbro's fault, really - 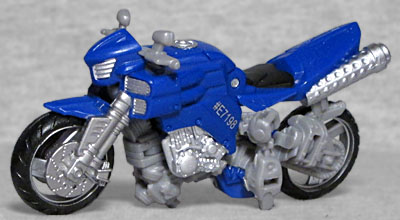 these toys are so small (Chromia, for example, is 3⅜" in robot mode, and 2⅞" x 1¼" as a bike) that every piece on them that moves is tiny tiny tiny, and thus hard to illustrate. Her altmode is a Suzuki B-King with particularly nice detailing on the brakes and engine. It looks like the rear wheel should come up closer to the back of the bike, and that there's just a molding error keeping it from going as far as it should, but that's accurate to the real motorcycle.

And now, finally, Elita-1. She got a toy from the first movie, but it was just a repaint. Then she got a toy from the second movie... and it was also just a repaint. She's been a repainted Chromia, she's been a repainted Arcee, but finally, after a full decade, she gets a mold of her own! Like Chromia, she stands on a single wheel, rather than two - the other one ends up on her left hand, while her right has a bit of a blade. A pointy shard of the bike's frame pokes up off her left shoulder, and both handlebars are tucked above her right. There's a weird spike sticking straight out of her foot-wheel, like she's a Ben-Hur chariot or something. Good on Hasbro for finally delivering this girl, way later than they promised to. Because all three bike-bots are different molds, all three of their display stands are unique.

By the time you get around to converting 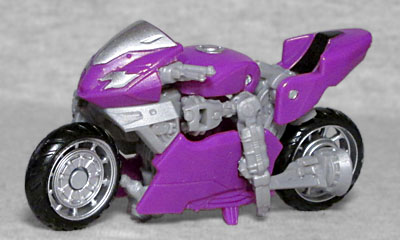 your third figure from this set, you'll really have a feel for it: having to swing both waist joints 180° is weird at first, but it begains to feel natural after all these attempts. Elita-1 is an MV Agusta F4, done for the first time in the proper purple, rather than bronze. While her robot mode was most similar to Chromia, her motorcycle mode is closer to Arcee - you know, almost as if they were sisters with a common set of traits, but distributed in such a way that they're all their own entities.

...at least until they combine.