You'll recall that the original plan for the three Arcees was that they'd be able to combine into a single, larger form. It was cut from the movie, but Hasbro said the toys would be able to do it. There was nothing in the instructions, but they repeated that directions to do so would be published online. Then Elita-1 turned into a repaint of Chromia, and the idea seemed to be scrapped, leaving nothing but fan modes to fill that gap. Well, once again, the instructions for this set do absolutely nothing to mention a gestalt form, but there are a couple conspicuous notches where the others' support stands can attach to Arcee, and why would that be if not for combination purposes? Let's see what it can tell us.

Since the stands aren't interchangeable, that means 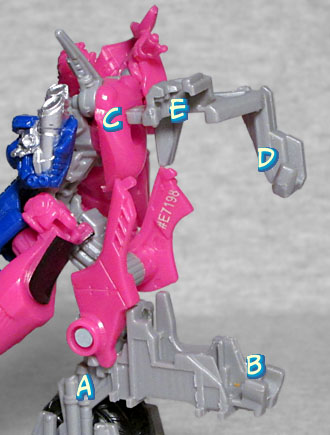 Arcee has to be the "base" of the combined form: everybody else plugs into her. That also explains why one of the set's accessories, a shoulder pad in "Chromia" blue, is designed to go on Arcee's arm and not on Chromia. A pink gun that's far too big for Arcee normally will look better once there's some more bulk on her, and Chromia's sword can be plugged into the left arm, as well.

Chromia's stand has a hook that slides into a shaped notch on the back of Arcee's leg (A), and a small bump at the far end of it matches a tiny hole on Elita-1's waist (B). Meanwhile, Elita-1's stand has a tab that fits into an otherwise-unused slot between Arcee's shoulders (C), a hexagonal peg that can plug under Elita's headlight (D), and you can slide Chromia's waist into it from the side (E). 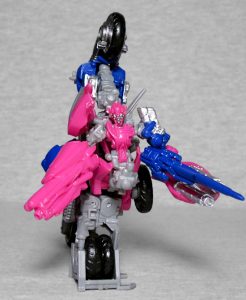 Now, there's nothing saying this is what the designers intended, and it doesn't look at all like the concept combined mode, but all the pieces are used and all the girls are combined. Plus, it's funny that Arcee is mostly in robot mode, Elita-1 is mostly in bike mode, and Chromia halfway in between. Play around with them, see if you can come up with something better. (For instance, flipping Elita's seat up makes her look less "unchanged," which I only thought of after taking these photos. Derp. Still doesn't stop her looking like an afterthought.)

$20 for three Legion-sized toys seems steep, but you're getting them all in one shot, all three of them have unique sculpts (for the first time ever) and they can kind of combine, beating Studio Series Devastator to the punch! It's a winner!