One of the new tribes introduced in BotBots Series 4 is the Winner's Circle, a group of golden trophy-bots who will judge the other team's efforts to cause mischief in the "Goldrush Games." They pretty much take the place of the previous series' Lost Bots, hiding out in the blind-packed portions of the packages.

Geeze, Hasbro and their metallic repaints. They've done it for years 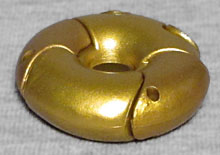 with Star Wars, and they tried to do it when they got the Marvel license (luckily for us all, Marvel fans were smart enough to not bite, so the idea was unceremoniously dropped and never brought back), and now they're trying to wheedle it into Transformers as well, just without the "it's an anniversary" angle. We're still left with a solid gold doughnut - which, sans any paint to suggest frosting or sprinkles, ends up looking like a solid gold hemorrhoid cushion. Thanks, Hasbro, this is just what everybody wanted.

Most of the Winner's Circle bots are existing molds, so we know how this one converts: pull down the feet, spread the arms, rotate the face forward.

The BotBots tribes are competing in the Goldrush Games to see which tribes are the most mischievous! Winning tribes are awarded shiny gold trophy bots 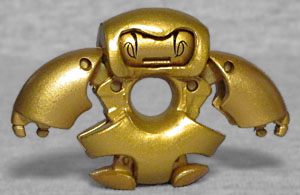 from the Winner's Circle tribe! This trophy bot is awarded for the most sweetly silly, bouncing-off-the-walls mischief and won't stop until he finds the perfect tribe! Who will grab the gold?

This is a repaint of Sprinkleberry D'uhnut, a Sugar Shocks bot we haven't reviewed yet. Being formed from a torus makes for an interesting robot mode, with chubby arms held out to the sides and tiny little feet that don't really come down any lower than the rest of the body. The face gets different paint than previous uses of this mold, with highly wide-set eyes.

Like the Lost Bots, the Winner's Circle members are only available in one package. So if you want Goldenberry D'uhnut, this Gumball Machine Surprise Unboxing set is the only place you'll find him.

Honestly, this set would have been a lot better with four more bots instead of stickers, and the golden one is totally meh, but it's still a lot of fun to dispense your own gatcha capsules and be surprised by what's inside.